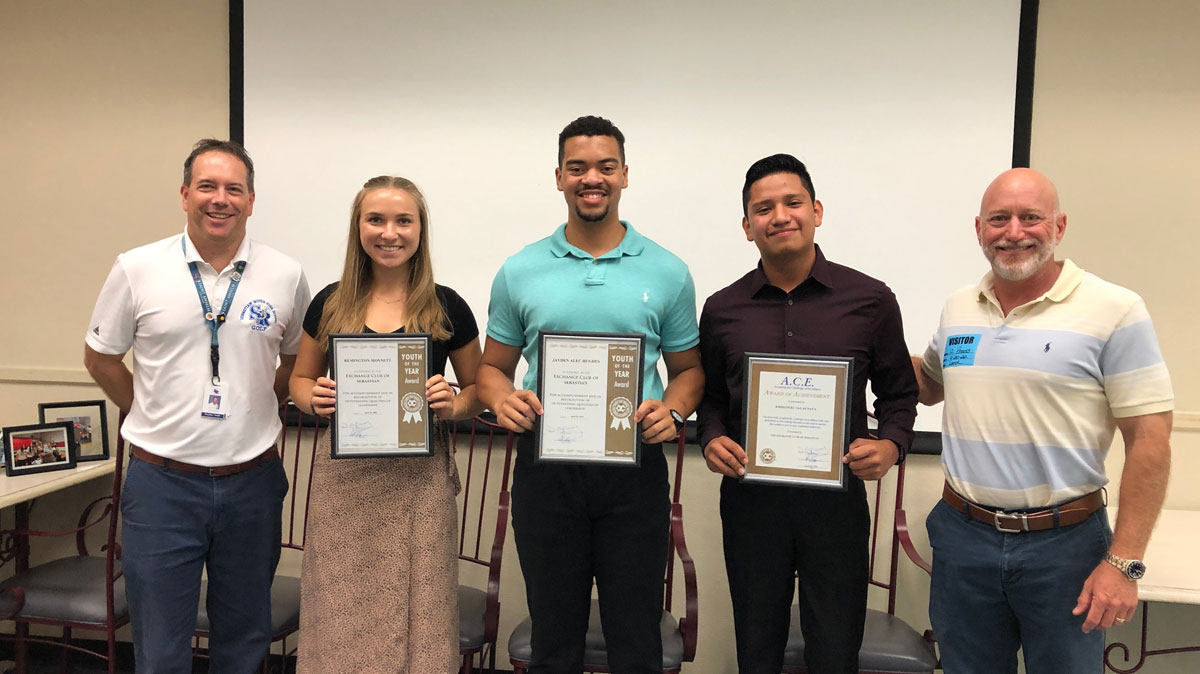 The Exchange Club of Sebastian is exceptionally proud to present “The Youth of the Year” awards to Remington Monnett and Jayden Hughes, both of Sebastian River High School. These students, one male, and one female were selected from “Youth of the Month” candidates for the 2021-2022 school year.

The students completed an application and wrote an essay to be considered for this award. The essay had to be between 800 – 1,200 words regarding how the COVID-19 Pandemic changed their perspectives on their lives.

The female “Youth of the Year” recipient is Remington Monnett, the 2022 Salutatorian of the Sebastian River High School’s graduating class. She concluded her Youth of the Year essay by saying, “Covid has changed the world, and while this can almost certainly be a negative change, I have managed to maintain a positive outlook on some of the changes in my own life. Just like in nearly every bad situation, there is a flower that grows after the rain, and I am beyond grateful that I have received the opportunity to grow a garden.”

“I appreciative of being recognized on this much broader level. It means a lot that I have been that much of an influence on so many people and become a stronger student,” Remington said.

Remington thanked the Sebastian Exchange Club, her parents, and SRHS advisors for their support in accepting her award.

The male “Youth of the Year” recipient is Jayden Hughes.

Hughes feels that the achievement that has been most impactful on his life is being named the first black Valedictorian in the history of Indian River County.

“The achievement that has been most impactful on my life has been the honor of being the first black Valedictorian in the history of Indian River County. This honor has allowed me to embrace the work ethic, tenacity, and perseverance that my family has instilled in me since birth and has provided me with proof of my capabilities. The love and support I have felt along this journey were immense, and I am forever grateful to be surrounded by people in my life who believe in me and lift me up in times of struggle, Hughes said.

He would like to encourage others to take advantage of any opportunities and not worry about potential negatives.

“This is the first of many steps that I would like to take to break societal misconceptions and notions that minority individuals cannot accomplish great feats in their lives. I want to be a voice and a symbol that inspires other youth to take advantage of any opportunities given and not worry about potential negatives. Even the most unattainable dreams could become goals right within our grasp,” Hughes stated.

The SRHS senior thanked the Sebastian Exchange Club and advisors “for believing in me and my hard work and his parents for their support and guidance.”

Accepting the Challenge of Excellence Award or A.C.E. Award

Additional awards given out by the Exchange Club include the Accepting the Challenge of Excellence Award or A.C.E. Award. The winner of this award has made dramatic changes in their attitudes and performances throughout high school, often overcoming educational, social, and personal obstacles.

The A.C.E. recipient is Emanual Salas Nava who moved to the United States from Mexico at the end of sixth grade and could not speak English. He was enrolled into the English Language Learner (ELL) classes and began to flourish. Nava entered high school still in the ELL program.

His teachers knew he was capable of more. So, it was decided that he would take some pre-International Baccalaureate courses and some honors-level courses his sophomore year, and he excelled. He has continued to excel in the IB Program since his junior year.

Due to financial constraints, Nava will attend IRSC before heading to a 4-year university. He will be the first person in his family to attend college. In accepting his award, he said, “the International Baccalaureate program has opened many opportunities for the future, and I appreciate all the help I have received. Looking back, now I know that it’s okay to not be okay and to be different.”

Nava is grateful for his struggles because it has made him who he is today.

“I would not change anything in my life, even if I could. The challenges I faced made me able to adapt during many situations, to grow, push myself, learn, and achieve. I am grateful for the struggles because they have revealed who I really am. Having this opportunity has made me realize the importance to be myself and help others who need it,” Nava stated.

A great gift for Mother’s Day in Sebastian, Florida

A great gift for Mother's Day in Sebastian, Florida