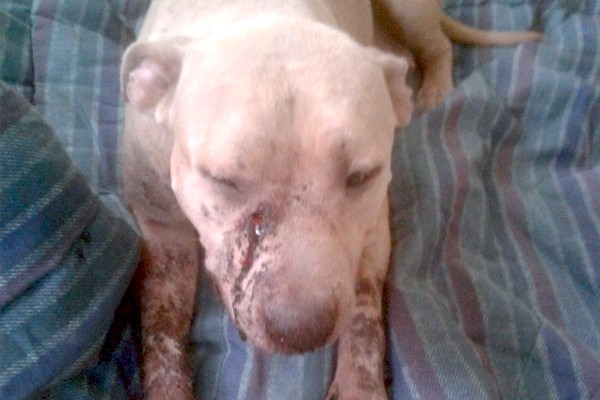 A dog returns home with bullet wounds after being shot an Indian River County Sheriff's deputy.

GIFFORD – A dog named Sandy returns home with bullet wounds after being shot by an Indian River County Sheriff’s deputy in Gifford.

As previously reported by Sebastian Daily, the dog was shot in the head while deputies were searching for a wanted person.

“The officer was parked on my property in an attempt to serve a warrant for someone around the block. The officer exited his vehicle and started walking through my yard when he noticed my dog was outside,” Caitlin Davis stated.

“The officer gave my fiance no chance whatsoever to get my dog. The officer shot my dog in the face and in the chest while she was still on my property. After she was shot she was so scared and hurt she ran into the wooded area by my house,” Davis said.

“The officers helped look for maybe 15 mins and all of a sudden they left. Left me with no answers and no dog. We had over 20 people searching for her, and we just could not find her it started getting dark, so we had to end our search,” Davis added.

The following day Davis had to work and decided to go to her house just to see if Sandy was nearby.

“I got out of my car and walked around the house and there she was! My poor baby Sandy standing there hardly breathing with a bullet hole in her face and covered with blood,” she said.

Davis immediately took Sandy to Highlands Animal Hospital in Sebastian where they have been providing help.

“They have been trying everything they can to work with us on the costs of her medical expenses,” Davis stated.

Indian River County Sheriff’s Office spokesman Major Eric Flowers stated that deputies parked to walk down the road and search for a wanted person. “As they got out, a pit bull aggressively approached them. They tried to retreat but couldn’t so one of them fired,” Flowers told Sebastian Daily.

Davis has setup a GoFundMe page for anyone willing to donate money to help in the dog’s recovery.