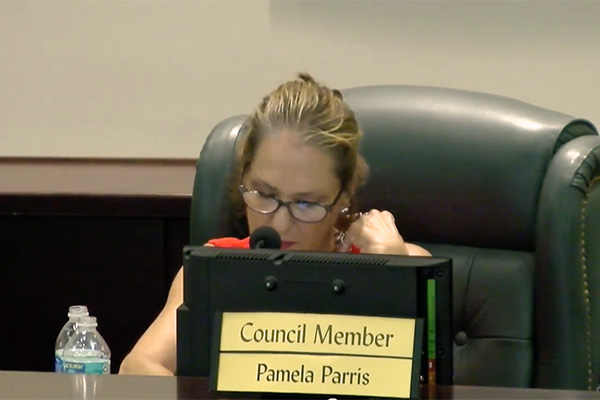 Disgraced Sebastian City Councilwoman Pamela Parris blamed the “press” for the reason she seconded councilman Damien Gilliams’ motion to reinstate Robert Bedea last month to the Natural Resources Board, according to a public email.

A Sebastian resident asked the city council why they voted to reinstate a man who committed a battery on a law enforcement officer. There was supposed to be a hearing and testimony at the meeting, but councilman Damien Gilliams motioned to bypass that and go directly to a vote, which Parris followed.

Parris chimed in and answered the public email.

“I wasn’t aware of Mr. Bedea’s violation due to negative energy I had to process and respond to regarding a press attack of words that never came from me,” Parris wrote.

The “press attack” she’s referring to is when Sebastian Daily published an article showing a public post made by Sebastian City Councilwoman Pamela Parris on her Facebook. Ever since the article was published, Parris has continuously flip-flopped about whether she made the post or not.

When the resident asked why she decided to second Gilliams’ motion without knowing the charge of battery on a law enforcement officer, Parris said she trusted the “good judgment” by Gilliams and proceeded with her vote.

“Because we need volunteers, and I know councilman Gilliams had good judgment in his familiarity of this,” Parris said.

Robert Bedea is a director with the Sebastian Property Owners Association, where Damien Gilliams serves as president and, until recently, Pamela Parris served as vice-president.

Last month, Parris called Sebastian Daily an “evil trash tabloid” during the City Council meeting (video). She then told residents that Alan Nelson at Hometown News instructed her to file a lawsuit against Sebastian Daily. We spoke with Alan Nelson, and he said Parris is lying.

The disgraced city councilwoman was then interviewed by WPTV (watch the video) and told them she did write it but didn’t mean to insult anyone.

Then, Parris told another paper that her Facebook was hacked, and someone else wrote the controversial rant. Parris also blamed Sebastian Daily for hacking her social media account.

“Parris said she planned to check with information-technology specialists to determine how the comments were posted on her social media page,” TCPalm reported.

“I will find out,” she said. “I don’t know how it got there. I didn’t write it,” Parris told TCPalm.

We contacted Chief Michelle Morris of the Sebastian Police Department, and she said Parris has never contacted them about a hack.

Parris has tried to discredit and blame the press and Sebastian Daily for over a month now.

Sebastian residents are encouraged to be at the City Council meetings to know what’s going on. Behind the smokescreen are members sitting on the city council who are willing to lie to their constituents.

Sebastian will warm up by the weekend