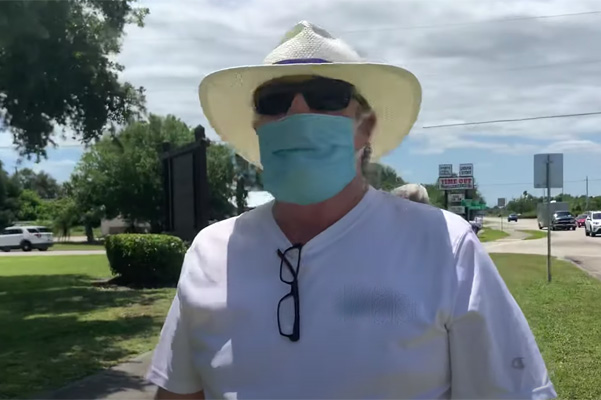 Damien Gilliams and No Name Bar

Damien Gilliams of the No Name Bar in Sebastian has received a code violation for having tables, chairs, picnic tables, and a bar in the business’s parking lot.

According to public records, this has been a repeat violation for Gilliams. He was warned late last year and given 15 days to remove the items but failed to do so.

“The owner has tables & chairs next to the building, picnic tables & chairs, bar in the parking lot, and in the green area adjacent to Harrison Street (facing Riverview Park) a picnic table in a green area adjacent to the dumpster. Nov issued and certified mail sent. The owner was given 15 days to remove all outdoor seating or update & obtain approval for such seating. I spoke with the owner’s son/agent. He stated that he would obtain approval from the city,” the officer said.

Gilliams and his son, Damien Lee Fey Gilliams, own and operate the No Name Bar.

While on the scene, the son called his father and Gilliams asked to call the officer who was at the business. Gilliams told the officer he was out of town and required an extension.

“I told him he would have to request the extension in writing. He stated that he’s asking me to verbally ask the Chief of Police for an extension. He was told I would consult with the Chief,” the officer said.

Gilliams and his son were arrested last month after they allegedly filed a false police report against Sebastian Vice-Mayor Jim Hill.

The two allege that Hill committed battery by pushing into the son at the courthouse during a criminal trial. However, investigators said they obtained video surveillance from the courthouse, and it reveals no such evidence of a battery.

They were attending the criminal trial for Damien Gilliams and Pamela Parris, who were found guilty by a jury on charges of Perjury and violating the Sunshine Law while they served on the Sebastian City Council.

Sentencing for the Gilliams and Parris case is scheduled for August 23, 2021