Sebastian Submarine Touches Down in Deepest Part of the Arctic Ocean 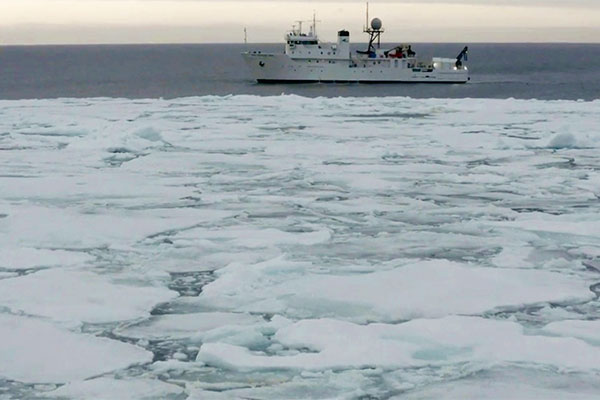 A team of explorers made five dives to the deepest parts of the world in a submarine made in Sebastian, Florida.

A submarine made in Sebastian, Florida, recently touched down in the deepest part of the Arctic Ocean.

On August 24th, with external sea temperatures dropping to 28 degrees Fahrenheit, explorer Victor Vescovo became the first human to dive to the bottom of the deepest point of all five of the world’s oceans.

It was the first manned dive ever to reach the bottom of the Molloy Trench and marked the completion of the 5th and final stage of the historic Five Deeps Expedition, the mission to reach the deepest point of all five of the Earth’s oceans in a manned submersible and diving them solo.

The expedition was completed using the DSV Limiting Factor – a specially-designed submersible (Triton 36000/2 model). It is the world’s deepest diving and only commercial, DNV GL-certified, operational submersible and its support ship, the DSSV Pressure Drop.

Victor Vescovo went by himself to complete the first dive to the bottom of the Molloy Deep, reaching a bottom depth of 18,208 feet. The dive took place 40-50 miles from an ice pack edge, making it a dangerous dive.

The Five Deeps Expedition is being filmed by Atlantic Productions for a five-part Discovery Channel documentary series, DEEP PLANET.

“I am so proud of our entire, extraordinary team that made the Five Deeps Expedition possible. It took us over four years to go from embracing the general mission to dive to the bottom of all the world’s oceans – something no government or organization has ever attempted – to building this amazing diving system and then actually doing it,” Vescovo said.

“I still can’t quite believe I had the great privilege of getting to pilot the sub down to all these places where no one has gone before. Who says there is nothing left to explore on this planet? There is plenty to explore, and learn, in the oceans,” Vescovo added.

In the middle of it all is a submarine made by Triton Submarines, LLC in Sebastian. The company has become the most experienced civil submarine producer in the world today.

“I felt a powerful wave of emotion as Victor emerged from his final dive of the Five Deeps Expedition. There was a tremendous sense of accomplishment, even relief, at having achieved the lofty goals Victor set out for us, tempered by the knowledge our remarkable journey had reached its natural and inevitable conclusion. Being part of this historic undertaking has been the greatest privilege of my professional life. It is my fervent hope our success has opened a door to an exciting new chapter in ocean exploration and our achievements will pave the way for future explorers to continue this important work. We thank Victor for trusting Triton to design and build the most extreme deep-ocean exploration tool in history,” Patrick Lahey, co-founder of Triton Submarines, said.

In May 2019, the submarine made the deepest dive in history to the bottom of Challenger Deep, to a record-breaking depth of 35,840 feet, breaking a record held since 1960 by Lieutenant Don Walsh and Jacques Piccard.