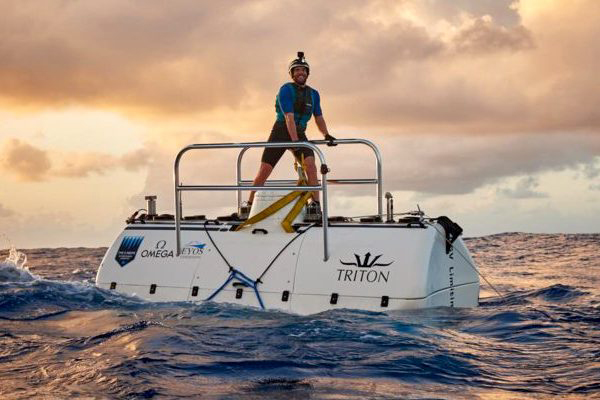 Tim MacDonald standing on one of the Triton Submarines. (PHOTO BY REEVE JOLLIFFE)

Victor Vescovo became the first human to make multiple solo dives in the Pacific Ocean to Challenger Deep, which is commonly known as the deepest point on planet Earth.

“At bottom, repeat at bottom. Thank you, congrats to you all, you all made this happen,” Vescovo said on the radio as he reached the bottom of the ocean.

The dives were made between April 28 and May 7, 2019. The final dive was in the Sirena Deep, which is also in the Mariana Trench, approximately 128 miles to the northeast.

The mission is part of the Five Deeps Expedition, which includes a team of explorers. The last visit to the bottom of Challenger Deep was made in 2012 by filmmaker and explorer James Cameron, who reached a depth of 10,908 meters on a dive in his submersible, the Deepsea Challenger.

Vescovo made the multiple solo dives in the Triton 36000/2 model submersible. The submarine is the world’s deepest diving, currently operational submarine. The expedition reached a maximum depth of 10,928 meters1 / 35,853 feet deep, 16 meters/52 feet deeper than any previous manned dive.

Triton Submarines of Sebastian, Florida, built the vessel that Vescovo used for the solo dives. The Sebastian company is the most experienced civil submarine producer in the world today.

“Our goal was to build a submersible capable of repeated dives to any depth with its pedigree and security assured by third-party accreditation,” said Patrick Lahey, President of Triton Submarines.

“Our dives in the Mariana Trench demonstrate we achieved our objective. The Triton 36,000/2 (‘LF’) represents a quantum leap in the capabilities of a manned submersible, and everyone at Triton is immensely proud to have had the privilege and opportunity to create such a remarkable craft, which was only possible by the unwavering support and vision of Victor Vescovo,” Lahey added.

Two of the dives, including the deepest one made on April 28, 2019, was filmed by Atlantic Productions for a five-part Discovery Channel documentary series due to air in late 2019.

“It is almost indescribable how excited all of us are about achieving what we just did,” said Vescovo. “This submarine and its mother ship, along with its extraordinarily talented expedition team, took marine technology to an unprecedented new level by diving – rapidly and repeatedly – into the deepest, harshest area of the ocean. We feel like we have just created, validated, and opened a powerful door to discover and visit any place, any time, in the ocean – which is 90% unexplored,” he added.

Rob McCallum of EYOS Expeditions, whose company is managing the expedition, said the recent dives have been monumental for ocean exploration.

“We have broken world records and achieved a number of world firsts. Most importantly we have opened the door to the final frontier — the exploration of the hadal zone and the workings of the deepest parts of the world’s oceans,” McCallum said.