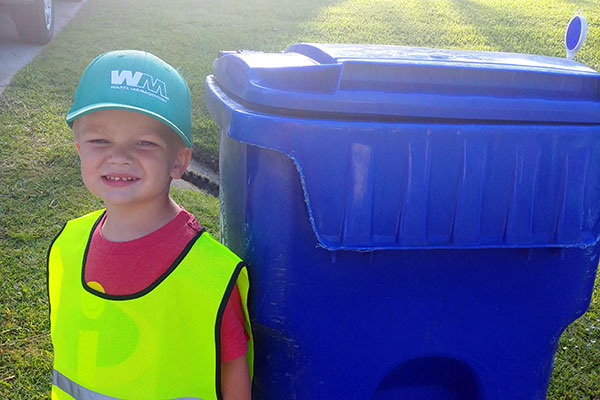 Roman, 3, started his own garbage can retrieval business.

A 3-year-old named Roman is so in love with garbage that he has started his own trash can retrieval business in his Sebastian neighborhood.

“It started with Roman’s enjoyment of watching the Waste Management trucks dumping the blue and green garbage cans into the hopper with the strong grabber,” James Kane told Sebastian Daily.

“Roman was very content with just watching the grabber empty the cans so he could return them to their rightful place,” Kane explained.

One of their kind Sebastian neighbors witnessed the youngster returning her garbage can, so she gave him a quarter.

“Through word of mouth, all of the neighbors now knew about hard-working Roman, and each of them began to pay him roughly a quarter per returned can,” Kane said.

The Sebastian youngster has befriended the Waste Management crew that services his block. He runs outside to watch that grabber, waves to the driver who is always smiling ear to ear, and gives Roman numerous loud horn honks.

Kane says his son has graduated into wearing a uniform on trash days and a T-shirt that says, “Garbage Day Is My Favorite Day of the Week.”

Roman is saving those hard-earned quarters now tallying over $40.00 in his Buzz Lightyear piggy bank.

“My wife and I refer to his business as Roman Incorporated,” Kane added.

FPL Helping Customers with Hardships Due to COVID -19