Planning & Zoning board passes land use changes for annexation 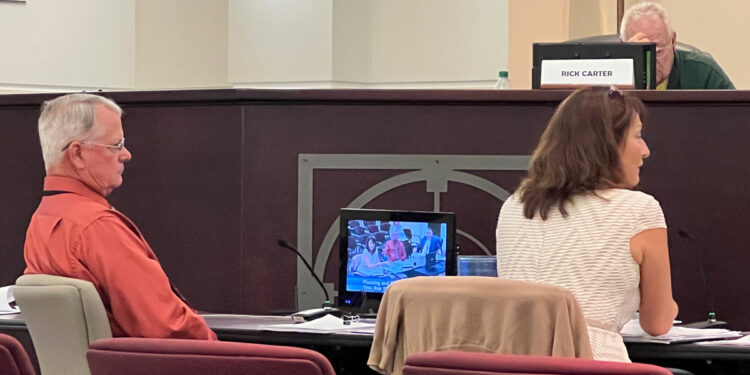 The Sebastian Planning & Zoning board voted unanimously for a City Council recommendation to approve land use changes in the upcoming Graves Brothers annexation. The change is to allow the land to be used for “mixed-use,” which includes both residential and commercial.

The city is hoping the annexation will bring more affordable housing and jobs. A “mixed-use” is needed to offer both, which are also recommendations by the state and Treasure Coast Regional Planning Council.

Councilman Chris Nunn said he was happy with the vote from Planning & Zoning.

“It’s a great step forward for an important and needed project for the future of Sebastian.”

The Friends of St. Sebastian and the Pelican Island Audubon Society voiced their opinions and ideas during the meeting, reminding everyone of the letter they sent encouraging the city to hire a consultant to oversee the annexation so it’s “done right.” So far, city officials have denied their request, citing reasons that they already have other environmentalists at the city on its Natural Resources Board to oversee the project and a land use attorney.

“It’s not that we don’t appreciate their ideas; we are already working towards all the protections they included that make sense for the City of Sebastian,” Nunn told Sebastian Daily.

The Sebastian annexation has also been a controversial topic since 2019. Many residents in Sebastian have already been vocal about the non-profit groups in past City Council meetings, saying they are trying to stall the process again as they did in 2019. In addition, they don’t understand why the two groups are choosing to fight with Sebastian when the county just approved septic tanks for a new development on the St. Sebastian River.

In all meetings, none of the board members of these environmental groups ever addressed the county and their projects that harm the environment. Residents say the non-profit groups, located elsewhere than Sebastian, look the other way when it’s a county development.

It is a fact that the City of Sebastian has done more to protect and improve the environment than any other municipality in Indian River County. For example, the city received its third consecutive Tree City USA Growth Award. Also, Sebastian has fertilizer bans and no longer uses Glyphosate (Roundup) while the county and other municipalities continue to do so. But unfortunately, city officials say these are some of the things the environmental groups have ignored over the years.

One resident at the last annexation workshop told Sebastian Daily that a board member from one of the environmental groups told her the city is incapable of handling a project this size, even though it’s completed several annexations with the same land owner for 100 years.

The two groups also allege that the city is rushing to annex the property, but city officials disagree. Mayor Jim Hill says it’s been four years already, and the land owner has been waiting to complete a simple voluntary annexation with delays due to misinformation by the environmental groups.

The Sebastian City Council will vote on the annexation in December.

Tropical Storm Fiona may be curving away from Florida