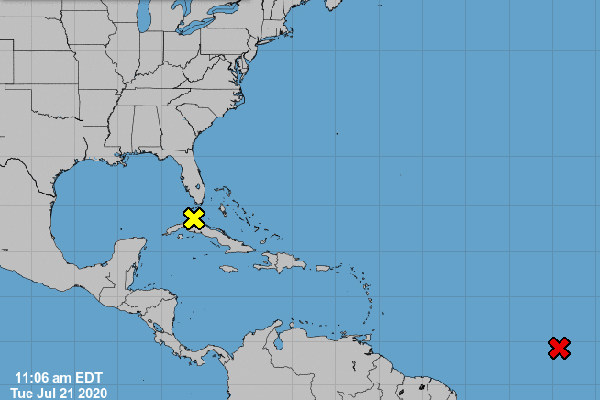 There are two systems brewing in the Atlantic Ocean, but it’s still too soon to know if they will have any impact in Sebastian, Florida.

The first system is a tropical wave that’s producing a large area of disorganized showers and thunderstorms south of Florida.

“Gradual development of this system is possible while it moves west-northwestward during the next few days,” the National Hurricane Center (NHC) said in a statement.

This system is expected to move over the southeastern Gulf of Mexico later today, the central Gulf on Wednesday, and the northwestern Gulf on Thursday and Friday.

There’s only a 30 percent chance of this storm developing within the next 48 hours. We can expect rain from this system is moves northwest.

The second storm is a low-pressure system located about midway between the west coast of Africa and the Lesser Antilles. This storm is the biggest threat, although we do not know which direction it will take.

If current trends continue, advisories could be initiated on this system as a tropical depression later today,” the NHC said.

The good news is, regardless of development during the next couple of days, there are less favorable conditions that should limit additional strengthening by the weekend.

There’s an 80 percent chance of development. We are keeping an eye on this system and will provide further updates.