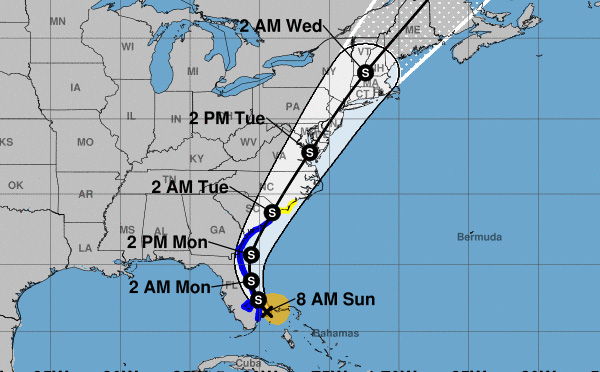 Tropical Storm Isaias lost strength overnight and has been downgraded from a hurricane. The storm is not expected to re-strengthen as it moves past Sebastian later today.

“Since Isaias has not shown any signs of re-organizing overnight, it appears that the window of opportunity for it to re-strengthen is closing,” the National Hurricane Center (NHC) said.

Isaias is about 40 miles from West Palm Beach moving at 8 mph with maximum sustained winds of 65 mph.

The hurricane warnings for Indian River County and Brevard County have been discontinued. However, we are still under a tropical storm warning.

“Later in the period, gradual weakening should occur as the storm moves northward along the east coast of the United States,” the NHC said.

In Sebastian, we can expect winds of 45-65 mph with possible gusts to 75 mph. Isaias is still a dangerous storm because of the wind speeds. There will be periods of heavy rain and potential flooding in our area.

Tropical Storm Isaias will be passing Sebastian at around 12:00 p.m. as it makes landfall south of us in Florida.

Sebastian Daily will have another update in a couple of hours. Stay indoors and be safe until Isaias passes.