Tropical Depression 11 forms, will upgrade to Tropical Storm on Wednesday 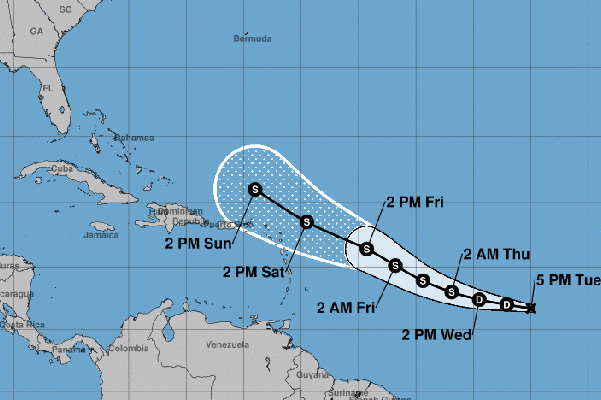 Tropical Depression 11 has formed in the Atlantic, according to the National Hurricane Center (NHC). The system is expected to be a Tropical Storm by Wednesday.

As Sebastian Daily reported earlier today, a tropical depression was expected to form today from a system that’s been building for the past 48 hours.

Tropical Depression 11 is moving west at 16 mph. A west-northwestward motion is forecast to begin Wednesday night and continue through the rest of the week.

“This pattern is expected to evolve rather quickly, with a break developing in the ridge over the central Atlantic by 48 hours. This change should allow the depression to begin making more poleward progress, moving west-northwestward from 36 hours until the end of the forecast period. The track models are in good agreement on this scenario, as well as the system’s forward speed, and bring the center of the cyclone near or just to the north of the northern Leeward Islands in 4-5 days,” the National Hurricane Center said in a statement.

The depression has maximum sustained winds of 35 mph with higher gusts. There are no coastal watches or warnings in effect.

As the depression becomes a tropical storm on Wednesday, most forecasting models agree that it will make a northward turn before going out to sea.

However, it’s on a similar path as Hurricane Dorian, which was supposed to stay on a northward turn and fizzle out. Instead, Dorian continued to the west before making landfall in the Bahamas as a category 5.

Sebastian Daily will continue to monitor the tropical depression and post updates when available from the NHC.