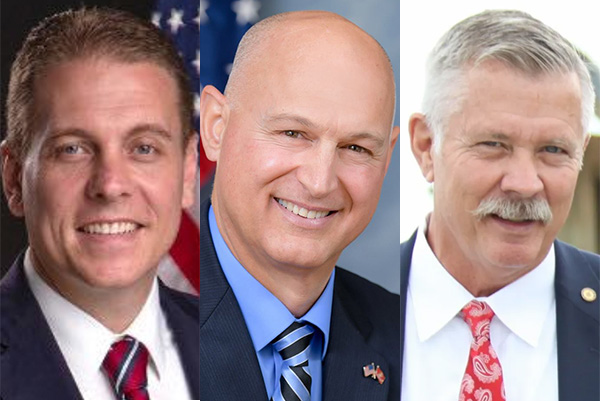 We reached out to the Indian River County Sheriff’s candidates and asked them a few questions that Sebastian residents wanted answering.

The first question was about the recall to remove Sebastian City Council members Damien Gilliams, Pamela Parris, and Charles Mauti.

Last month, we asked the same question to the candidates for Indian River County Commission and they support the recall.

The second question was, what would you do if Indian River County suddenly became Portland or Seattle? The thought that any American city or county could become a police-free zone like Portland and Seattle is concerning.

We received responses from Eric Flowers, Keith Touchberry, and Chuck Kirby. You can also read the bios of all the IRC Sheriff’s candidates.

From what I know about the council situation in Sebastian, there is more than sufficient cause to support a recall of those elected officials. All of the evidence put forth comes directly by their hands, so it is clearly not political.

If I am elected Sheriff there will be absolutely no possibility of a situation similar to what is occurring in Seattle happening in Indian River County. The events in Seattle are occurring because the elected officials are allowing it to happen. The Seattle Police could easily quell the violent riots if they were permitted. The county Sheriff is not subordinate to any politician and acts at his own discretion.

Therefore, I would opt to end any violent protests immediately. Nonviolent protests are not a threat to public safety, rather they are an exercise in free speech covered under the 1st amendment. Therefore peaceful protests will be supported.

I believe the citizens of Sebastian have done the right thing to recall members of the Sebastian City Council. While I respect our established election procedures, public officials must be held accountable for egregious actions.

When elected officials are arrested (Damien Gilliams and Pamela Parris), their constituents should have the opportunity to reevaluate their fitness for office. I know that Governor DeSantis is busy handling the statewide response to the COVID-19 pandemic, but it is disappointing to me that his office did not step in to take action.

As YOUR SHERIFF, Indian River County will never become a sanctuary city, police-free zone, or whatever nonsensical term these criminals choose to use. Rioting, looting, and the takeover of government buildings and private businesses is never acceptable. The idea that Portland, Seattle, and other cities’ alleged leaders allowed these actions, negotiated with the radical organizers, and did not protect their communities is unconscionable in my eyes.

I support Florida’s municipal recall process as outlined in statute and believe the citizens of Sebastian are doing what they feel is necessary to have the type of representation they want from their elected officials. I also commend them for the manner in which they have conducted themselves during the process.

Since only the electors of a municipality can participate in the recall of one or more of their elected officials and I am not a Sebastian resident, I have no standing in this matter. As your Sheriff, however, I would use the authority of my office to enforce the law for any recall process in Indian River County and support any other law enforcement agency where the process was occurring should that be necessary.

I understand and share the concerns of many about what is going on in Portland and Seattle. I hope Americans question the accuracy of the media coverage coming from that region, however, and are not lead astray by false narratives.

I know incidents of unlawful detentions and arrests of protesters by federal agents have been reported and disputed. I also know that criminals determined to vandalize and destroy federal property while threatening and harming officers is a reality, and the presence of anarchists determined to maintain the chaos cannot be overlooked.

Many innocent people and business owners have been victimized, and the mayhem must end. Having lived in Indian River County for 31 years, it is difficult to envision a similar situation happening here. We are vastly different communities and lack the history and political climate supportive of such disorder.

Nevertheless, the key to facing a similar problem is to prevent a supportive climate from developing in the first place. Government and law enforcement must be transparent, have good partnerships in the community and always strive to maintain the public trust in everything they do from passing laws, to service and accountability.

Law enforcement should work with groups who plan to protest and let them know their efforts will be supported as long as they remain lawful. Should unlawful civil unrest occur, it must be met with swift and decisive law enforcement actions designed to prevent harm and quell disorder while protecting constitutional rights.

I am not a resident of the City of Sebastian; however, I support the recall because the grounds for removal have been clearly established, as required under Florida Law.

As for the pending lawsuit to stop the recall, it is my opinion the courts will ultimately determine that the question of whether or not the officials committed the acts that subject them to recall is for the voters (and not the courts) to determine.

The lesson-learned is ideology, or single issues should not replace experience. Vetting political candidates remains the best way to determine if they are too extreme or inexperienced to be viable.

As Indian River County’s next Sheriff, I will focus on protecting the community, preventing crimes, and solving problems. A quick threat analysis makes this particular “what if” scenario highly implausible.

In the continental United States, Portland and Seattle are about as far geographically (and politically) as you can get from Indian River County Florida. With their dense populations of 2.1 and 3.4 million respectively, these two cities have a long history of known and potential threats from identifiable groups not currently operating along the Treasure Coast.

Thankfully, our community supports both the rule of law and our local law enforcement officers.

Tropical Depression 11 forms, will upgrade to Tropical Storm on Wednesday