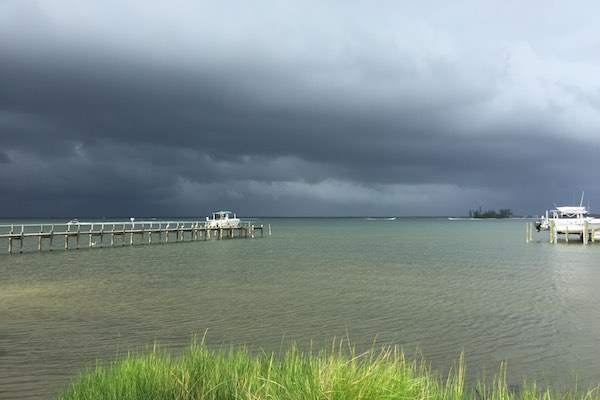 Storm causes problems for many boaters along the river in Sebastian, Florida.

SEBASTIAN – Several boaters raced to shore Sunday afternoon after a storm moved into the area, but one small vessel sunk in the river near the Tiki Bar & Grill in Sebastian.

“We just left Earl’s to get home to our dog who panics in storms,” Joan Campbell told Sebastian Daily.

At the main street boat ramp, boaters were anxiously waiting their turn to depart as the waves increased. Several boats took on large amounts of water at the docks at Captain Hiram’s Resort.

“We were at Captain Hiram’s with two boats taking on water. A bunch of people running down the docks with five-gallon buckets to bail them out,” Ron Adamson said.

At Tiki Bar & Grill, Bill and Terry Lochman were in a small boat when they had engine failure. They were seen paddling their boat, attempting to make it to the dock. They went under the dock and their boat sunk in the shallow waters just south of the Tiki.

“Right near the boat ramp, the kill switch acted up and killed the engine because we took on so much water. It’s sunk right now, it’s sitting on the ground,” Bill Lochman told Sebastian Daily.

Lockman had more trouble as he was coming in after losing the keys to his vehicle. The keys were in a shirt pocket that was laying inside the boat.

“A wave came, had the keys inside my shirt pocket, shirt went up in the air, and the keys came out. I lost them both in slow motion, right into the water,” Lochman added.

The National Weather Service sent out a storm watch earlier in the day before it moved south along Sebastian and the river at approximately 4:45 p.m.

Man steals from Sebastian Walmart because he “needed a grill”

Man steals from Sebastian Walmart because he "needed a grill"