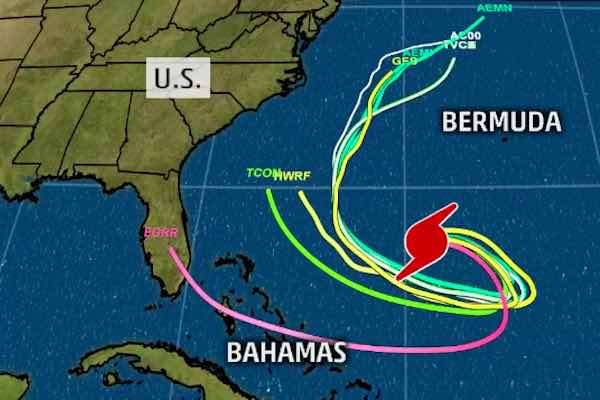 The latest track shows Hurricane Jose is moving to the east. (Photo: NOAA)

SEBASTIAN – Hurricane Jose has maximum sustained winds of 75 mph as spaghetti models reveal a loop in the Atlantic that will take it off the coast of Sebastian and Vero Beach, according to the National Hurricane Center.

Hurricane Jose spaghetti models from the U.S. GFS and the European system agree on a westward movement this week, the National Hurricane Center said. But the Euro model is taking a track that could make landfall near Sebastian and Vero Beach.

“The hurricane appears to have turned eastward,” the National Hurricane Center stated. “The track guidance forecasts Jose to make an anticyclonic half-loop during the next 72 hours. After that time, the confidence in the forecast decreases as the guidance diverges significantly.”

The hurricane is currently a Category 1 storm as it makes a loop in the Atlantic off the Florida coastline.

Some additional weakening is possible during the next day or so, and Jose could weaken to a tropical storm later today.

This is small storm and is not a threat at this time to Sebastian and Vero beach. There are no coastal watches or warnings in effect.