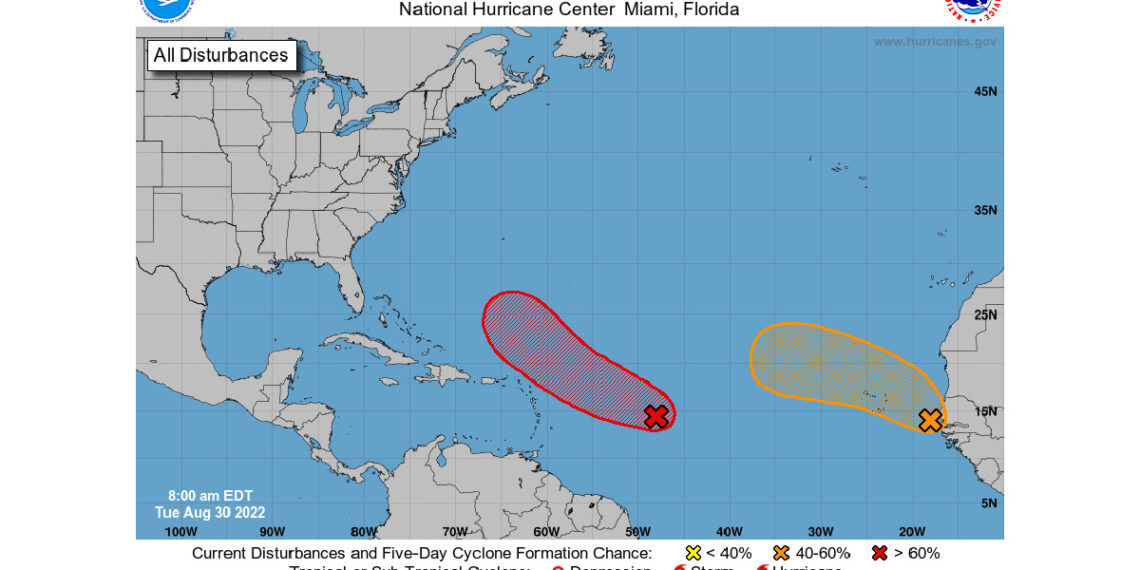 Forecasters at the National Hurricane Center (NHC) are monitoring two Atlantic tropical disturbances, but neither is a threat to Florida at this time.

One system is located east of the Caribbean Sea, steering to the north, and another is a tropical wave that is near the coast of Africa. Early model predictions show both systems moving to the north and northwest.

There is no threat of a tropical storm or hurricane in Sebastian. It’s too early to predict any rain from these disturbances, which we desperately need in our area.

The first system, shown in red on the map above, is located several hundred miles east of the Lesser Antilles as it produces showers and thunderstorms.

The NHC said it could become a tropical depression later this week.

“Although environmental conditions are only marginally conducive, some gradual development of this system is expected over the next several days, and a tropical depression is likely to form later this week.”

The system will continue to move slowly toward the west and then west] northwest at 5 to 10 mph toward the adjacent waters of the northern Leeward Islands. There’s an 80 percent chance of formation.

A tropical depression will mean maximum sustained surface winds of 38 mph or less.

The other system is a tropical wave located just off the west coast of Africa. While some gradual development is possible, the NHC said it would become a short-lived tropical depression in the Atlantic during the next few days.

“By late this week, the disturbance is forecast to move over cooler waters and further development is not expected. Regardless of development, the system could bring locally heavy rainfall to portions of the Cabo Verde Islands by Wednesday,” the NHC said in a statement.

The chance of formation is only 40 percent.

For the Sebastian forecast, we can see some thunderstorm development later on Tuesday through Saturday. The chance of rain this week is 50 percent.

However, the heat index is 106 for Tuesday and 103 for Wednesday.

It’s still too early to predict the weekend. We’ll have another forecast later this week.

Sebastian Daily will continue to update you on the tropics.

2 people run off with $3,300 in merchandise from Walmart