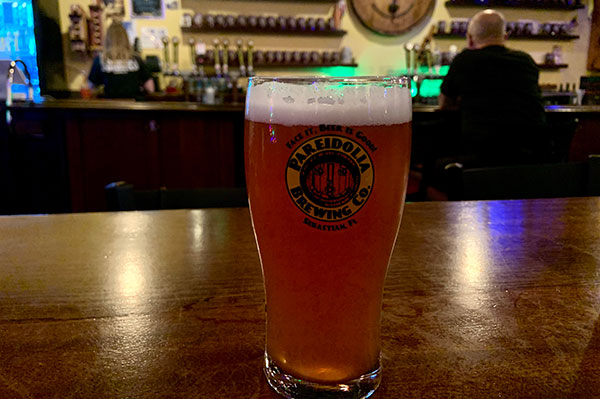 We tried a new beer on tap called U-Pick Raspberry Pale Ale at the Pareidolia Brewing Company in Sebastian and thought it was one of the best refreshing brews out there.

Many people don’t like fruit in their beer, but brewmasters love to experiment with new recipes.

The U-Pick Raspberry is pretty popular right now at Pareidolia. You can smell the fresh raspberries the moment you pick up the glass. The hazy beer is hoppy but has a raspberry finish. As Anderson said, it blends nicely.

Sebastian is lucky to have two excellent breweries in town. The other brewery is Mash Monkeys Brewing Company in Sebastian. The owners Pat and Derek are always helpful.

Also, whenever it’s available on tap, Mash Monkeys carries a beer called Pink Cadillax. It’s cranberry and they call it a hard lemonade. As we stated before, most people don’t like fruit in their beers, but this one is also refreshing when it is available. We are also featuring another beer from Mash Monkeys later in the week.

The popularity of craft beer in our town is huge and still growing steadily since 2014, when the Pareidolia Brewing Company opened the first brewery in Sebastian.