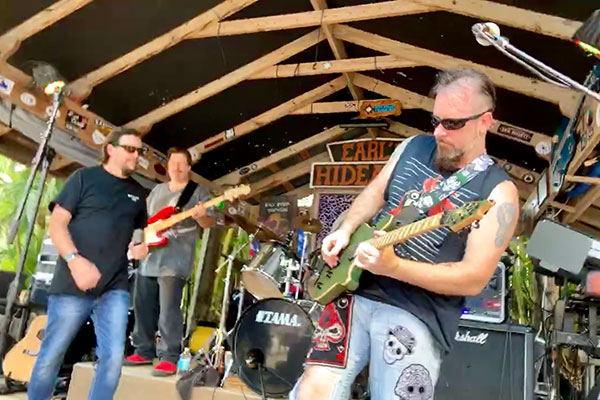 It was a breezy Sunday afternoon when a band called Tribucon began to play a Foreigner song on the stage at Earl’s Hideaway Lounge in Sebastian, Florida.

Tribucon is a tribute band that played four hours of Foreigner, Journey, and Styx at Earl’s Hideaway Lounge. There was a large crowd with people dancing and singing all the words to every song.

As the band played “Urgent” by Foreigner, lead singer Glenn Bailey sounded just like a young Lou Gramm. It only got better when they played “Juke Box Hero,” “Double Vision,” and “Hot Blooded.” The instruments all sounded great.

One hour later, Tribucon began to play Journey. Again, lead singer Glenn Bailey sounding like a young Steve Perry. The vocals and the range were there and loud without missing a note. Moreover, Bailey sang without any effort, as if it was natural. Bailey never skipped a beat, and the performance only got better.

Tribucon was founded by Bailey, who also often plays at Earl’s Hideaway in another band called Crashrocket. You can learn more about the group from their Tribucon Facebook page.

In May 2019, Earl’s Hideaway Lounge was voted Best Live Music in Sebastian, Florida.

Sebastian Police Department Offers “Refuse To Be A Victim” Seminar