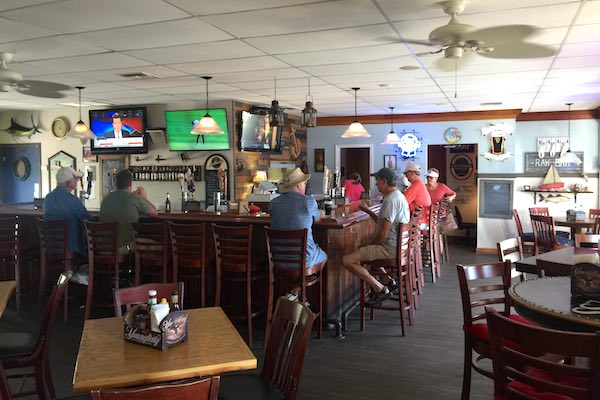 SEBASTIAN – Portside Pub & Grille may quickly become a fan favorite for the locals and snowbirds.

Once known for their grilled cheese and chicken salad sandwiches, Portside now has a new menu offering more choices than ever before.

Last month, we reported that Portside Pub & Grille had a new owner.

Well, on Saturday they opened their doors to the public, and on Monday we stopped in and met owner Jonathon Preece and manager Brad Nelson.

Preece told Sebastian Daily that they made several changes to the menu. Some of the regulars were surprised to see that the chicken salad sandwich on the old menu was gone, but they also appreciated the new choices.

For an appetizer, we ordered the Dolphin Fingers, mahi-mahi, spiced with Cajun seasoning. They were tender, flaky, and delicious.

We then ordered the Fish & Chips – Twin Tilapia Filets that came with steak cut fries and homemade cole slaw. This meal was made up of two fish fillets, lightly breaded, that were tender and flaky. The steak fries were good.

We also ordered the Tenderloin Tidbits, which came with a veggie medley and chef’s roasted taters. The tidbits were very tender and sauteed with onions, shrooms, and sweet peppers.

They serve up a good portion size and also allow adults to order off of the kid’s menu.

In the kitchen, Preece added Mark Brown as the sous chef.

Preece is expanding the outside patio in the back of the restaurant to become a clambake and BBQ. He has a lot of plans for the patio that is still a work in progress but hopes to have it up and running soon.

Overall, the prices on the menu are reasonable with sandwiches starting at $8.95. There are menu items that can be pricey because they offer things like Dungeness crab.

They are starting a Happy Hour from 3 p.m. to 5 p.m. that will offer drink specials and hors-d’oeuvres.

“When you buy two drinks, the customer receives a plate to use at our new hors-d’oeuvres buffet,” Nelson told Sebastian Daily.

Portside Pub & Grille is located at 717 Coolidge Street in Sebastian.