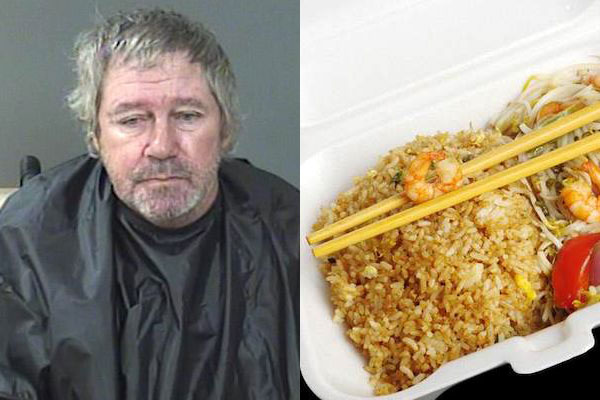 Man refuses to leave bench at storefront in Sebastian, Florida.

SEBASTIAN – A store owner called the Indian River County Sheriff’s Office to report a man sitting on a bench covered in Chinese food at Riverwalk Plaza in Roseland, reports show.

Deputies arrived and found 54-year-old Sidney Fredrick Stracke sitting on a bench while observing an odor of an alcoholic beverage emitting from his breath when he spoke.

Stracke said he drank “some beers” earlier in the day.

Next to Stracke was a Publix shopping cart with two empty 20oz cans of Natural Light, some clothes, and a cowboy hat.

“Stracke was attempting to eat Chinese food from a styrofoam container, but was missing his mouth and spilling the food all over himself,” the deputy said.

The deputy informed Stracke that a store owner wanted him trespassed and asked him to remove himself from the property and not return.

Stracke then asked the deputy “what is my options?”

The deputy told Stracke “either you gather your belongings and leave, or I arrest you for trespassing and take you to jail,” according to the affidavit.

“Well fu**. I guess you’re going to have to take me to jail because I’m not leaving this bench,” Stracke told the deputy, reports show.

Stracke was arrested for Disorderly Intoxication and transported to the Indian River County Jail.