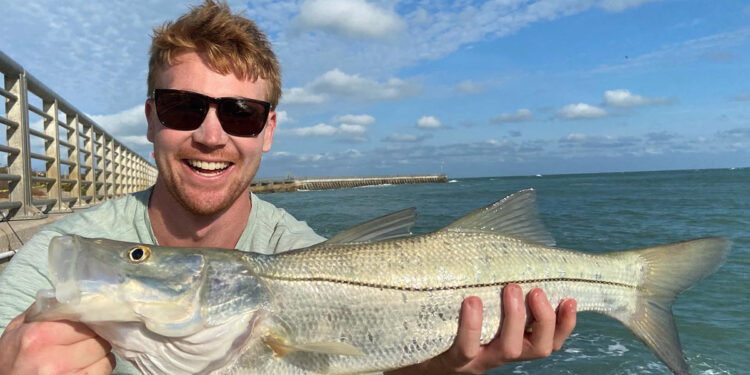 Andrew Knight with a Snook at the Sebastian Inlet

Anglers are catching snook and snapper at the Sebastian Inlet, St. Sebastian River, and the Indian River Lagoon in Sebastian, Florida. Snook season has closed and reopens on Feb. 1, 2023. Snook must be released unharmed.

Some people are talking about catching flounder, but others tell us they haven’t caught anything near the Inlet. The flounder just aren’t biting right now.

From late November, with the first cold front, and running through January, flounder move out of the Indian River through Sebastian and into the Atlantic.

Most anglers say fishing on the incoming tide at the South Jetty is where you want to be for flounder. Successful catches are using finger mullet as bait.

Andrew Knight (pictured above) caught a nice size snook at the Sebastian Inlet. He’s visiting from Richmond, Virginia. By the looks of the length of that snook, he is having a blast here in Sebastian.

Knight used swim bait on a 1/4 ounce jig head, and a PENN reel during the catch.

Also catching a snook is Andrew Denick from Melbourne, Florida. He told Sebastian Daily that he often fishes here, especially in the river.

For this catch, he used live finger mullet on a Shimano TranX 400 reel. The Shimano is excellent, featuring a super-free spool and a viable brake system.

Dave Belson of Sebastian told Sebastian Daily he launches from either the Sebastian Inlet State Park or the Main Street boat ramp. He got a nice mangrove snapper off of Spoil Island 8.

It will be a cold weekend, with temperatures dipping near 36 degrees on Friday and Saturday nights. The high will be near 52 degrees on both Saturday and Sunday.