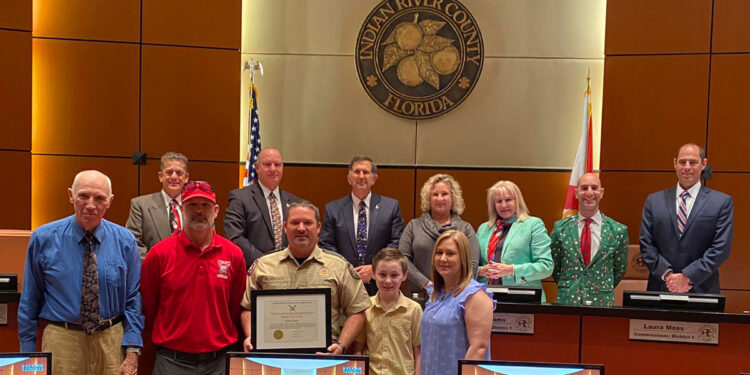 Lt. Dustin Lightsey of the Florida Fish and Wildlife Conservation Commission (FWC) received the Heroic Act Award from the United States Lifesaving Association after saving people at the Sebastian Inlet.

On Tuesday, Dec. 20, 2022, Joe McManus, an officer with the association, presented the award during the Board of County Commissioners Meeting in Vero Beach.

“The first one was in 2017, a boat was capsized and lodged against the jetty, Dustin Lightsey was on duty that day and went into the water and saved five people,” McManus said.

Then, in June of 2022, Lightsey was off duty that day and was surfing at the Sebastian Inlet State Park. The north swell was pushing water against the north side of the jetty.

“At one point, he took a wave, and he wiped out, and his board went to shore. He swam onto shore, and there were two teenage girls there who helped retrieve the board and handed it to them,” said McManus. “He thanked them and went back out. As he was surfing, a few minutes later, he noticed only one girl on the shore, and she looked like she was in distress.”

McManus said the girl was making gestures that worried Lightsey. He looked around and saw that her friend was caught in a dangerous rip current on the north side of the jetty.

“Dustin paddled over, secured the young lady on his board, and, according to Dustin, it took him a good 10 to 15 minutes to get out of the rip current. He was exhausted, but he saved her life. She would’ve drowned. So with that, I want to thank Dustin for his heroism,” McManus said.

Lightsey said he receives the award for those who do many rescues that never get noticed.

“I also want to thank the Lord for putting me in the right place on the right day and time to be of service to help others,” said Lightsey. “And for keeping me safe. Sometimes we are putting ourselves in danger, and I want to come home to my family.”

County Commissioner Susan Adams said she’s glad to have Lightsey in our community because he is one of those people who will respond to keep everybody safe.

“Lt. Lightsey does a lot more throughout the county to keep our residents safe, whether it’s in the woods, in the marsh, or on the ocean. He’s been involved in several difficult situations,” said Adams.