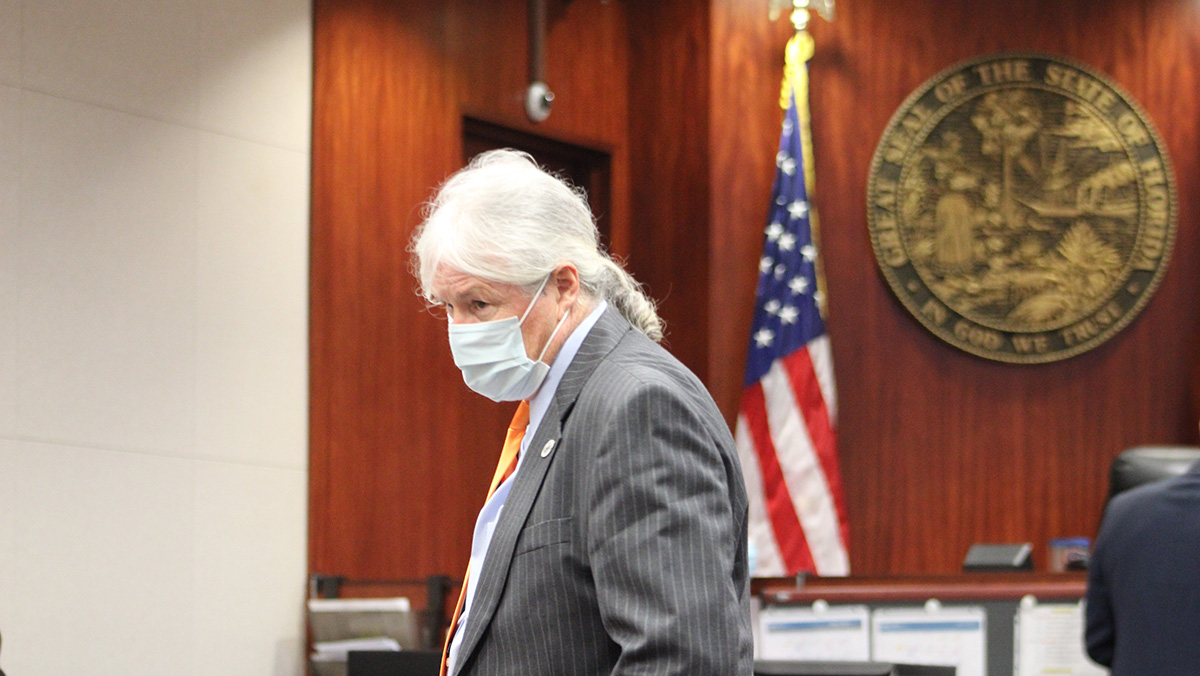 The criminal trial of former Sebastian council members Damien Gilliams and Pamela Parris resumes Thursday and is expected to last at least until Monday, May 24, 2021.

There were a few laughs in the courtroom from Gilliams and Parris after the prosecution showed the video of the alleged illegal meeting. The laughter was after someone stated “psst … the police are coming” in the video recorded inside the city chambers.

The jury also watched security surveillance footage taken at City Hall on April 22, 2021, leading up to what prosecutors say was an illegal meeting.

The footage shows the lights out in the chambers with only the security lights on. Gilliams is seen looking at a sign on the door and in the lobby informing the public that the regular city council meeting was canceled.

Soon after, about ten people entered the chambers, including Diana Bolton, Bob Stephens, and Robert “Dr. Bob” Bedea. All members of the Sebastian Property Owners Association (SPOA). Dr. Graham Cox was also seen in the council chambers, and Russell “Buzz” Herrmann remained outside on a bench.

Barbara Brooke-Reese MIS Director for the City of Sebastian Testimony

Testifying Tuesday was Barbara Brooke-Reese, the MIS director for the City of Sebastian. When she was asked who was in the April 22nd meeting, she recognized Diana Bolton, Bob Bedea, Bob Stephens, Pamela Parris, Charles Mauti, and Damien Gilliams from the video.

Brooke-Reese testified that emails were sent to Gilliams informing him of the canceled meeting and that there was correspondence between him and City Manager Paul Carlisle.

When asked who some of the people were in the video who entered the chamber, Brooke-Reese said they were mostly members of the Sebastian Property Owners Association (SPOA).

When asked if she knew if they were all supporters of Damien Gilliam’s and Pamela Parris, Brooke-Reese answered, “they were supporters.”

Reizenstein said a regularly scheduled meeting is required once a month, per the charter, and that the City Manager and Mayor violated the charter by postponing it. He said there was no consensus from the City Council to cancel or postpone the meeting.

“When you received an email from Paul Carlisle stating there was a consensus to cancel this meeting, did you take that as three agreed,” Reizenstein asked Brooke-Reese. She replied, “Yes.”

Gilliams’ attorney, Jeffrey H. Garland, argued that there was no consensus to cancel the city council meeting.

The prosecution said Gilliams, Parris, and Mauti entered the chambers and had a “secret meeting” and never covered the agenda items for the regularly scheduled meeting.

Williams said various co-workers and friends notified her that she was fired during the “secret meeting.” When asked if she went to work the next day, Williams said, “Yes, the government business had to go on.”

She also stated that both Gilliams and Parris received training on the Florida Sunshine Law. Gilliam’s received his training in person, and Parris watched her training videos online.

The most powerful testimony on Wednesday came from Former Vice-Mayor Charles Mauti, who testified for the State.

Mauti, who took part in the “secret meeting,” testified that he had multiple phone calls with Gilliams on his personal cell phone about city business.

When asked why he did not use his city-issued cellphone, he stated his personal phone was easier to use.

Mauti told the prosecution that he had several conversations with Gilliams about him becoming mayor. He said the conversations increased leading up to the meeting on April 22, 2021.

The prosecution then played the video that was recorded during the alleged illegal meeting. In the video, towards the end, Stephens is heard saying, “Psst! The police are coming!” Gilliams and Parris then laughed at the video in the courtroom.

Sebastian Daily will continue its coverage of the trial, including several videos that will be uploaded later Thursday night. We plan to finish all coverage this week by Saturday.