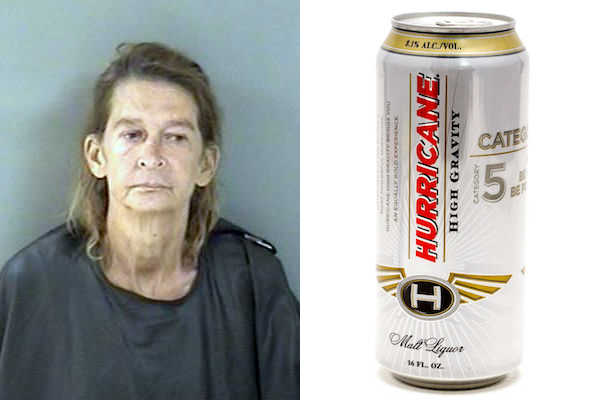 Woman asks police for a drink, buys beer and drinks it in front of officers in Vero Beach.

VERO BEACH – The Vero Beach Police Department received a call about a woman sitting in the roadway Thursday flagging down vehicles at the 1800 block of 19th Street.

Officers made contact with Leah Walker, 56, who advised she was having trouble standing and was trying to get to 20th Street.

As officers helped Walker to her feet, she complained of dehydration and asked for something to drink.

“Walker appeared to be sweating profusely so I transported her to the Kwik Stop so that she could buy something to drink,” the officer said in the report.

Once there, the owner of the laundromat next to the Kwik Stop advised that Walker was not welcome near his business because of past experiences.

When Walker returned from Kwik Stop, the officer saw her drinking a 16 oz. can of Hurricane beer. She was warned not to drink the beer near the businesses because of a city ordinance.

However, Walker ignored the officer’s request and continued to drink the alcoholic beverage.

“Walker advised she needed to drink due to a medical condition and continued to drink,” according to the report.

The officer took the beer away from Walker and placed her under arrest for the open container.

Walker was then transported to the Indian River County Jail.