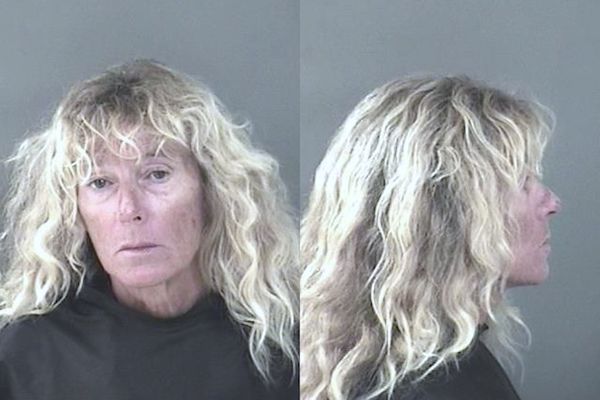 SEBASTIAN – A 56-year-old woman who is known to walk the streets in Sebastian and Barefoot Bay was arrested by the Sebastian Police Department on a trespassing warrant.

Joan Carberry Sava was located at the 1200 block of Indian River Drive Tuesday morning where she was arrested for the active warrant.

Sava, who is always seen wearing a teal colored flowered dress in the area, has been asked to leave at most establishments in Sebastian, including Tiki Bar & Grill, CC’s Place, No Name Bar, Captain Hiram’s, Earl’s Hideaway, Salty’s, and Mulligan’s.

Patrons have complained that she was soliciting men for sex at several establishments.

Sava has also been seen walking the roads in the community of Barefoot Bay, allegedly soliciting prostitution.

Last week, Sava was standing in the roadway waving down vehicles in Barefoot Bay. Residents called the Brevard County Sheriff’s Office, but she was gone by the time deputies arrived.

According to jail records, Sava has been arrested seven times for trespassing multiple businesses, and one arrest for DUI in 2006.

Last year, Sava was arrested for trespassing at Captain Hiram’s after she allegedly used a man’s hotel room key to buy food & drinks.