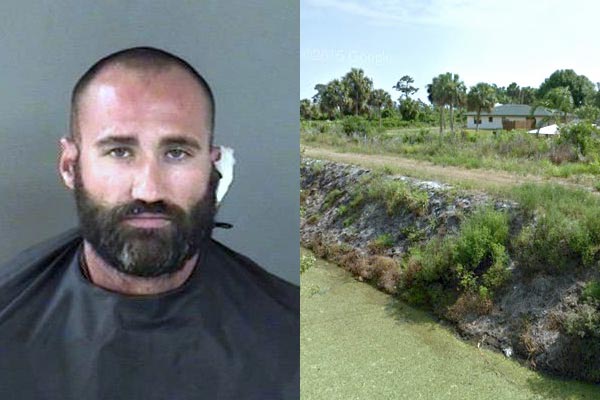 Man tries to steal fishing rods and a speargun from a home in Vero Beach.

VERO BEACH – A 28-year-old man was arrested after taking $3,700 worth of fishing rods from a home in Vero Beach.

The Indian River County Sheriff’s Office received a call from the victim about a male subject who was inside of his garage in Vero Beach carrying six fishing rods and a speargun to his vehicle.

The fishing gear is valued at $3,700.00. The victim had a verbal confrontation with the subject and asked him to place the fishing rods and speargun back into his garage.

The subject returned the items and left the scene in a Ford F-150 truck that had a “pool service” business sticker with a hitched trailer.

About 1 hour later, the victim called the Indian River County Sheriff’s Office a second time when the subject returned to the residence.

Deputies returned and attempted to make contact with the suspect, identified as Wyatt Douglas Guy. The victim’s home and garage are next to a canal, where the suspect parked his vehicle.

Eventually, the deputy apprehended Wyatt Guy and transported him back to the residence.

Guy told the deputy that he was driving home from work earlier and observed the fishing rods in the garage through the open door. He told deputies that he couldn’t afford fishing rods like the victim’s because his wife recently had a baby.

“He has rods that are worth $3,000.00, I took some of the less expensive ones,” Guy told the deputy, according to the report.

Guy said he took the speargun and a handful of fishing rods before the victim saw him carrying the gear towards his vehicle.

The victim told Guy the fishing rods belonged to him. “Okay, I’ll put them back,” he allegedly told the victim, the report said.

Guy said he heard the victim’s wife yelling to call law enforcement as he left in his work truck. He went home, changed his clothes, and told his wife that he needed to leave again to speak. That’s when Guy returned to the residence to apologize.

When the deputy asked Guy why he ran, he said, “I didn’t want any part in it” and “Didn’t want to mess up my life.”

Guy was arrested and transported to the Indian River County Jail where he was charged with felony burglary and resisting arrest.