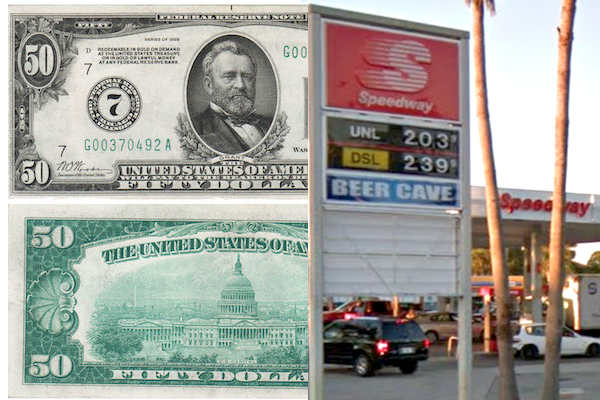 You can't always trust those currency pens at Speedway in Vero Beach.

VERO BEACH – One man was surprised when he handed a Speedway clerk a $50 bill in Vero Beach.

The manager at the Speedway Gas Station in Vero Beach called the Indian River County Sheriff’s Office about a man trying to pay for gas and other items with a fake fifty-dollar bill.

The customer was surprised at the turn of events after the clerk checked the bill using a currency pen.

With a currency pen, bills are deemed fake if the mark remains on the bill. It’s usually an indication that the currency is counterfeit.

While the bill looked real, store policy will turn away currency that does not pass the pen’s inspection.

Deputies then made contact with the customer, identified as Pasquale Nasci. He said he didn’t know the $50 bill was fake.

“Nasci advised that he did not know the bill was counterfeit and that he received it as change from another gas station,” the deputy stated.

Nasci did pay for the other items using other money he had on him.

“I then inspected the fifty-dollar bill. The currency had a serial number of B07411909A and was made 1950. Based on research, I was informed that currency printed prior to 1960 was made with from a different type of parchment, and currency pens would not work on them,” the deputy said in the report.

Upon further inspection of the bill, the deputy observed it had red and blue fibers, indicative of real currency.

The $50 bill was returned to Nasci.