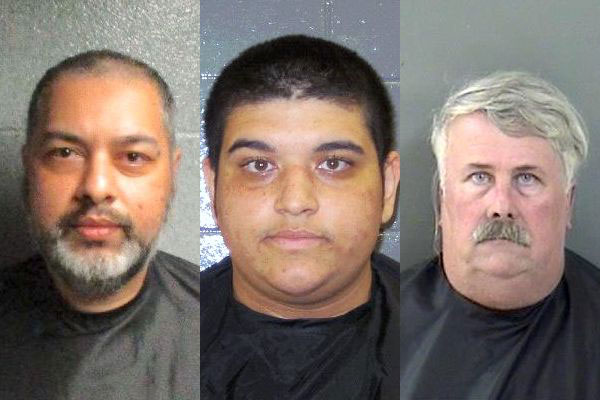 Suraj Narine, Christopher Narine, and Michiel Hamons tried to carry out a plot to murder an elderly woman for money.

VERO BEACH – A man who offered $5,000 to a homeless man to kill his 73-year-old mother has been sentenced to eight years in prison, according to court records.

Also involved in the plot was Suraj’s son, Christopher Narine, 21, and Michiel Hamons, 56, a homeless man in Vero Beach.

The three men were arrested in December 2016 days before the plot was to be carried out.

Suraj Narine, who still lived at home, was to inherit his mother’s wealth tried to have her murdered by injecting her with an excessive amount of insulin and driving her vehicle into a canal, according to the Indian River County Sheriff’s Office.

Assistant State Attorney Steven R. Wilson said “this is a very tragic and very painful situation,” after Suraj Narine was sentenced to prison.

Wilson said the mother’s input in the case was a factor in the sentencing of her son, who faced 30 years on each felony count.

More: Arrest Made in Connection With Vero Beach Hit & Run

Cox ordered Suraj Narine to have “no harmful contact” with his mother when he is eventually released.

Christopher Narine pleaded down his charges to third-degree grand theft and was released after serving 304 days in jail.

Hamons was released after serving 334 days in jail. He was working as an informant and recorded the men discussing the murder plot.

The plot to murder the woman was uncovered by a homeless man who was working as an informant and recorded the men discussing the murder plot.