Vero Beach Man Denies Being In Fight At Sunoco 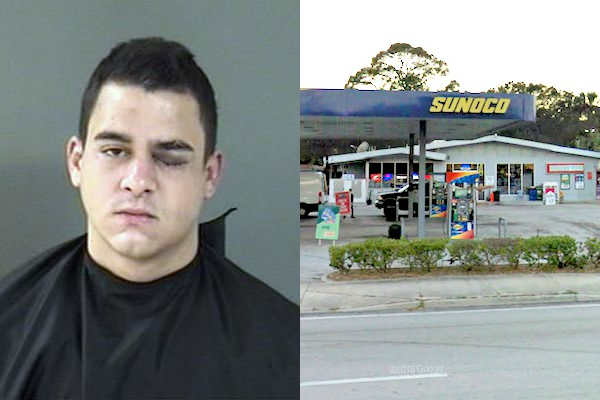 A man who was walking around with a black eye in Vero Beach denies being in a fight.

VERO BEACH – An employee at the Vero Beach Sunoco gas station called police about a fight between two subjects, one had already left the scene.

Officers with the Vero Beach Police Department arrived and found one of the subject’s involved in the fight sitting next to the front door at Sunoco.

Joseph Samuel Jones, 22, denied being in a fight. Jones was bleeding from his left eyebrow. The officer then detected a strong odor of alcohol emitting from his person.

“Upon speaking with Jones, he denied ever being in a fight or being in the area of the fight,” the officer said.

The Sunoco manager asked the police to issue Jones a trespass warning from the property.

Jones then threw his backpack into the air, allowing all of its contents to scatter across the parking lot.

When the officer told Jones to gather his stuff and leave the property, the subject again refused and began to throw his stuff around the parking lot.

The officer arrested Jones for disorderly conduct and trespassing.

Jones was also arrested for possession of a controlled substance after the officer found 3 Alprazolam pills without a prescription in his pocket.

The officer transported Jones to the Indian River Medical Center in Vero Beach to be checked out for his injuries.

While at the hospital, he yelled profanities as patients walked by.

Jones was later transported to the Indian River County Jail.

In June, Jones was arrested for yelling obscenities from the bushes of an apartment building. A woman called police after she was walking on the sidewalk with her 7-year-old child when Jones began screaming at them for no apparent reason.

In May, Jones was arrested after he yelled at passing motorists on U.S. Highway 1. A deputy saw Jones jumping into traffic in Vero Beach and running into the roadway.

Since 2015, Jones has been arrested 12 times in Indian River County.