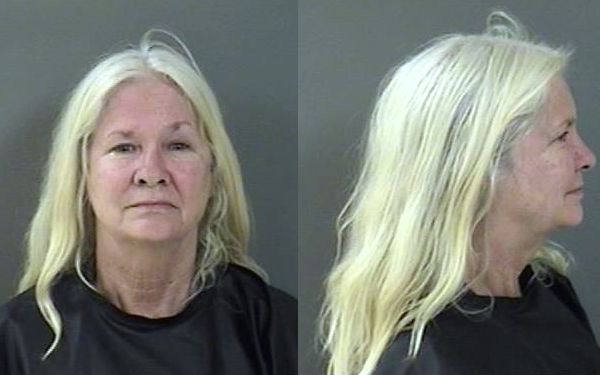 A woman who parked her car on a Sebastian roadway thought she was in her driveway. (Photo: Indian River County Sheriff's Office)

SEBASTIAN – A woman in Sebastian parked her car in the middle of the road on Dahl Avenue thinking it was her driveway.

On Wednesday, at approximately 3:30 p.m., a motorist called the Sebastian Police Department to report a reckless driver on Schumann Drive and Empress Avenue. The vehicle in question, a red 2017 Mazda MX-5, had run off the roadway and struck a stop sign, according to the report.

Officers responded to the location, saw the stop sign on the ground, but didn’t see the vehicle.

While driving through the area, a pedestrian told the officer that a vehicle was parked in the middle of the roadway on Dahl Avenue, the report said.

The officer found the vehicle and a woman, identified as 61-year-old Therese Jean Miller, passed out behind the wheel with the music turned up loud.

Officers made contact with Miller and noticed she had a strong odor of alcohol on her person. The officer turned the vehicle off and asked why she was parked in the middle of the road.

Miller then fell back to sleep and was woken again.

“The defendant replied by stating, ‘Why are we here again,'” the officer said.

Miller told police that she was in her driveway.

“I then asked the defendant if she had consumed an alcoholic beverage today and she responded ‘yes’ while simultaneously making hand gestures as if she was beginning to pray to God,” the officer stated.

Police then made contact with the caller who said Miller was swerving in and out of north and southbound lanes in the school zone and during school dismissal.

The witness then observed Miller take an evasive right turn and crash into a stop sign. The witness stated then when she yelled out to the driver, Miller just smiled and continued to remain in a state of confusion.

Miller was arrested and transported to the Indian River County Jail where she was charged with DUI W/Property Damage, and leaving the scene of an accident.

A breath sample was submitted, and the results were .277 the first time, and .287 for the second test, more than three times the legal limit.