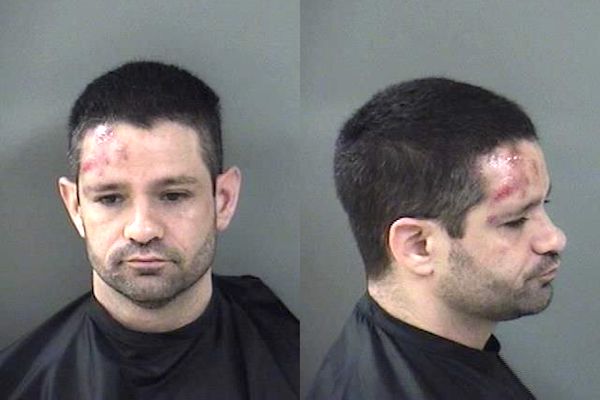 SEBASTIAN – A 38-year-old man was arrested Sunday night after officers responded to the No Name Bar at approximately 9:00 p.m., according to the Sebastian Police Department.

Lorenzo Regina, of Sebastian, was found laying in a parking lot after drinking a bottle of vodka.

“I located the subject at 482 U.S. Highway 1 (Sandwich Shack) laying in a prone position in the parking lot,” the officer said. Police smelled a strong odor of alcohol coming from Regina as they made contact with him.

When Regina tried to stand up, he was swaying back and forth, according to the report.

Regina stated, “who the fu– sent your black a– here,” the arrest affidavit said.

The officer then decided to have Regina’s girlfriend transport him back to their residence. But while escorting him to her vehicle, Regina became upset.

As the officer grabbed his arm, Regina pulled away and started yelling to let him go. The officer advised him to comply with his commands, but he began to pull away again.

“Due to the erratic behavior of Lorenzo and my safety on scene, I placed him in mechanical restraints,” the Sebastian officer said in the report.

Regina received a one-inch abrasion on the right side of the face when he fell on the concrete surface at the location.

He was transported to Sebastian Medical Center for treatment, then transported to the Indian River County Jail where he was charged with Disorderly Intoxication, and Resisting Arrest.

Salty’s Closes In Sebastian Without Notice