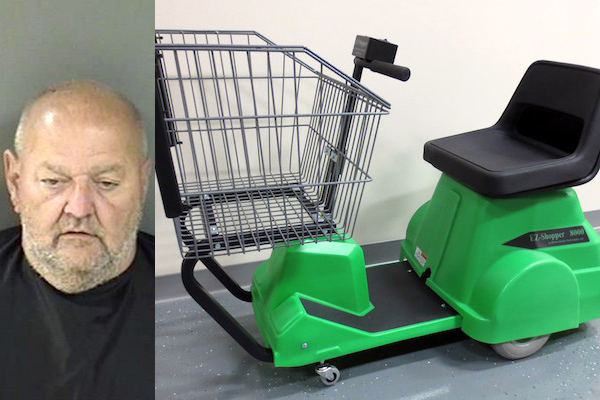 SEBASTIAN – The Indian River County Sheriff’s Office responded to a call at the Sebastian River Medical Center after a man drove a Publix motorized shopping cart to the emergency room and refused to leave.

The man, identified as 64-year-old Crayton Coursey, was “belligerent with staff and began throwing children’s toys around the lobby,” the report said.

A nurse said that Coursey showed up earlier in the evening on the scooter and demanded to be seen immediately by a doctor. While waiting, he began to throw toys across the room in the lobby. The hospital agreed to take him back so that he wouldn’t create a further disturbance.

When Coursey was discharged, he refused to leave the medical center. A security officer then asked him to leave, but Coursey said he was waiting for a ride.

Then, about 15 minutes later, Coursey started another disturbance. The staff called the police.

Deputies made contact with the subject outside of the emergency room. Coursey was very belligerent and was calling the security officer names.

When deputies asked him to settle down, Coursey said he would appreciate it if they would leave him alone. Deputies then told the subject that he was trespassing and was no longer welcomed on the property.

Coursey then pointed to his ear and stated “I can’t hear you” as deputies tried to talk to him. He was then arrested and transported to the Indian River County Jail where he was charged with Misdemeanor Trespass After Warning.