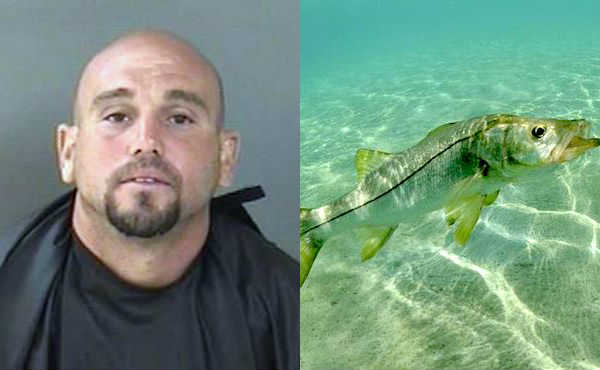 A man tried to avoid an arrest in Sebastian by bringing back to life a Snook during its off-season.

SEBASTIAN – A man who brought a snook back to life after being caught fishing in closed season was still arrested anyway.

Fernando Pantoja, 37, was spotted by an officer with the Florida Fish and Wildlife Conservation Commission as he was using a castnet in the Indian River off the shoreline of Little Hollywood on Riverview Drive.

The officer asked Pantoja to stop fishing and to return near the shoreline to have his cooler and net inspected.

Instead, Pantoja started throwing fish with both hands out of his cooler.

“I ran to the defendant location and told him to stop throwing the fish as he continued to discard them,” the officer said.

The officer observed at least ten fish on the bottom of the river. But there was one very large Snook floating on the top of the water, sideways.

Pantoja, who told the officer he works as a fisherman, knew that if he was caught with the Snook, he could be arrested. So, he started to bump it so that it would come back to life.

“I told him to stop and put it in the cooler. He did not, instead bumping it allowing it to come to,” according to the report.

While the large Snook woke up and swam away, he gave the officer an undersized Black Drum.

“Defendant took all fish by castnet which is illegal for Snook as well as Snook season being closed,” the report said.

Pantoja was arrested and transported to the Indian River County Jail where he was charged with not allowing an inspection by an officer of the State as well as other pending charges.