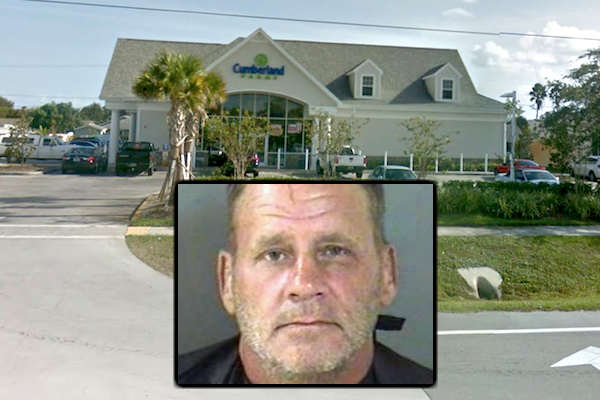 SEBASTIAN – On Saturday, November 25, 2017 an elderly white male attempted a robbery at the Burger King on U.S. south of Sebastian shortly before 7:00 am.

At about 7:00 am a similarly described white male approximately 60 years of age committed an armed robbery at the Cumberland Farms store at the corner of Barber Street and Sebastian Blvd. It appears the suspect parked his vehicle on Clearmont Street.

Sgt. Dino Savvidis and the dayshift responded to the robbery and set up a perimeter net for the area. Shortly thereafter, a white male of the same description confronted a 75-year-old male victim in his garage on Landsdown Drive nearby.

The suspect carjacked the victim by physical assault and fled the area in the victim’s car. Sebastian officers responded and immediately broadcasted a description of the vehicle.

Deputies from the Indian River Sheriff’s Office spotted the vehicle and began a pursuit.

The suspect, Dallas Ray Baldwin, was apprehended in a joint effort by the Indian River Sheriff’s Office and Sebastian Police Department following the deployment of tire deflation equipment and the use of the PIT (Pursuit Intervention Technique) by a Sebastian Police Officer.

“This was another example of excellent teamwork by the police agencies of Indian River County,” said Chief Michelle Morris. “Mr. Baldwin chose to expose several innocent people to violence. Our police officers and sheriff’s deputies are going to do whatever we legally can do to stop such violent rampage on our citizens. I am sure he is headed for another lengthy prison sentence.”

Any witnesses with additional information please contact detectives at the Sebastian Police Department at 772-589-5233.