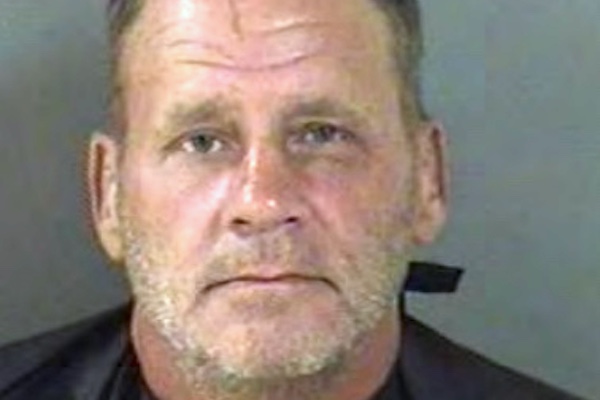 A man who tried to rob the Burger King on U.S. 1 is also a suspect in a robbery and carjacking at the Cumberland Farms in Sebastian. (Contributed photo by Indian River County Sheriff's Office)

SEBASTIAN – A man who attempted to rob the Burger King at 8680 U.S. Highway 1 is now in custody after a chase, according to the Indian River County Sheriff’s Office.

Dallas Ray Baldwin, 54, is also a suspect in a robbery and carjacking incident at the Cumberland Farms in Sebastian.

A 911 call from Burger King at approximately 6:40 am, reported a subject, later believed to be Baldwin, had implied he was in possession of a weapon and demanded money. No weapon was reported as being seen.

At approximately 11:17am, the suspect was seen near US 1and 45th Street in a stolen Kia Soul. He fled from deputies and traveled north on U.S. 1, reaching speeds of 99 miles per hour.

Baldwin went to Schuman Drive in Sebastian and made several U-turns, at times traveling in the opposite lane of traffic. He then proceeded south on U.S. 1 and ran over stop sticks which had been deployed by deputies at 85th Street.

The vehicle Baldwin was driving eventually lost air in all four tires and came to a stop at the 8400 block of U.S. 1. He was taken into custody and transported to Indian River Medical Center by EMS for a self-inflicted facial laceration incurred by striking his head against the Plexiglass screen in the back of a patrol car.

Deputies reported that while Baldwin was fleeing, he was pointing his finger to his head in what was believed to be his attempt to indicate his intention of committing “suicide by cop;” the act of intentionally threatening a law enforcement officer in an attempt to elicit a deadly force response. Immediately after his arrest, he stated to deputies, words to the effect of, “why didn’t you just shoot me?”

Baldwin is listed as a Habitual Violent Career Offender. He lists an address in both Fellsmere and Sebastian.

The precise charges will be available on our website once he is booked into the Indian River County Jail. However, detectives report he will likely be charged with robbery and felony fleeing and eluding in addition to any charges stemming from his actions in Sebastian.