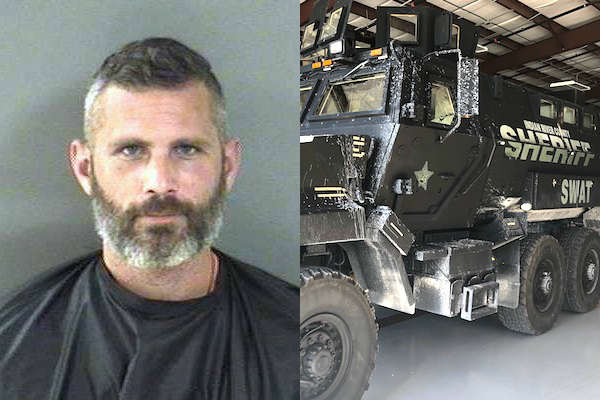 A man was arrested in Vero Beach after firing his shotgun in the air. Photos by Indian River County Sheriff's Office.

VERO BEACH – Overnight, Indian River County Sheriff’s Deputies responded to the 7800 block of 1st Street SW in Vero Beach to a call regarding a man firing a shotgun.

Arriving deputies learned that during a party at his home, Joshua Plauche, 33, became angry and retrieved a shotgun from inside of the residence. Plauche was intoxicated and has a history of violence.

After threatening several party goers, he discharged the shotgun into the air as people fled the area. His wife, Hillary Plauche, fled into their home and hid, not knowing if she was safe.

“A perimeter was established around the residence as deputies and those fleeing the area did not know the location of the suspect on this large property,” Major Eric Flowers said.

The Indian River County Sheriff’s Office Special Weapons and Tactics (S.W.A.T.) Mine-Resistant Ambush Protected (MRAP) vehicle, obtained as part of the federal government 1033 surplus program, was deployed to the home to rescue the woman. She was transported to safety and debriefed as deputies continued to look for the suspect.

A short time later, Plauche walked out of the woods near a deputy on the perimeter, where he was taken into custody.

Plauche was arrested and charged with felony aggravated assault with a deadly weapon, possession of a firearm by a convicted felon, and possession or use of a firearm while under the influence of alcohol.

“A very dangerous criminal was taken off the streets last night due to the excellent work of our brave men and women in patrol. Because we were able to obtain the MRAP as surplus government equipment, we were able to safely evacuate Mrs. Plauche from the home without putting our deputies in harm’s way. We are grateful to our federal partners for continuing this program, as equipment like this saves lives,” Indian River County Sheriff Deryl Loar stated.

He is currently being held at the Indian River County Jail without bond.