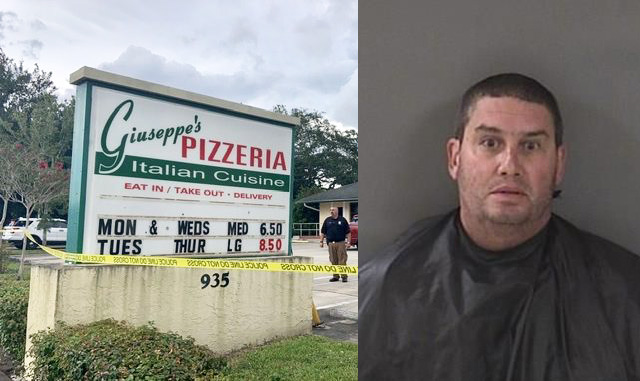 According to the Sebastian Police Department, a gunman who opened fire inside the Giuseppe’s Pizzeria Friday told police his intended target was the manager, not the waiter.

William Carrodus, 56, told police he arrived at the Italian restaurant at approximately 11:00 a.m. and was waiting on a food order to be ready so he could make a delivery.

“While waiting on the order, he said that he and [the manager] got into a verbal altercation about work issues, at which time the defendant stated that he became extremely angry with [the manager]. The defendant described his anger as being a ‘white rage.’ The defendant then left the business with the food and delivered it to the scheduled address,” the affidavit said.

After making the delivery, Carrodus continued to experience anger towards the manager, so he decided to retrieve his AK-47 assault rifle and returned to the restaurant.

“The defendant said he drove his truck extremely fast down Barber Street and into the parking lot of the business. He said he then exited his vehicle and decided to speak to the owner of the business,” investigators said.

An employee told police that the manager was taunting Carrodus as he spoke with the owner. When the conversation with the owner failed, Carrodus ran out to his truck and grabbed his AK-47.

“After arming himself, the defendant said he fired a few warning shots towards the building,” according to the report.

Carrodus attempted to scare people away. He told detectives that he intended on “getting rid of” the manager and was going inside to kill him, the report said.

As he made his way into the restaurant to look for the manager, he shot multiple rounds with his AK-47. Carrodus then saw several employees running out the doors to the business, and he followed some of them out the rear kitchen door while still holding his rifle.

Carrodus then observed Frank Strahorn injured with what appeared to be a gunshot wound to his arm.

At this time, Carrodus went back into the restaurant and exited the southwest door that he originally came through when he started shooting. He then emptied the rest of his AK-47 magazine into the manager’s vehicle.

“He placed the AK-47 on the ground and walked over to his own truck. After lowering the rear truck tailgate, the defendant said he sat on the tailgate and waited for law enforcement to arrive so that they could arrest him,” according to the affidavit.

Carrodus immediately surrendered to the first officer who arrived and was taken into custody.

Carrodus told police that he didn’t mean to shoot anyone else in the business and that his target was the manager. He said that while working at Giuseppe’s, he never got along with the manager.

“The defendant said that his anger just built up and that on today’s date, he was unable to control his anger,” detectives said.

Carrodus did acknowledge that he probably hit Strahorn with one of the bullets he fired from his assault rifle, but he never meant to kill him.

Video surveillance footage from inside Giuseppe’s showed Carrodus entering the restaurant and firing multiple rounds from his AK-47.

The manager told detectives that he called in a second delivery driver because Carrodus had not completed all of his work duties and needed additional help in the business. The manager said he and Carrodus had many disagreements throughout the week about various work issues.

The manager said Carrodus became upset when the second delivery driver was called in. When Carrodus returned from his food delivery, he began to argue with the manager.

According to the manager, Carrodus ran outside, and then he heard gunshots being fired “inside the building and could see debris flying inside.” The manager then ran out of the building and down the alley behind the business for safety.

Carrodus has an arraignment scheduled for Friday, August 7th, 2020.