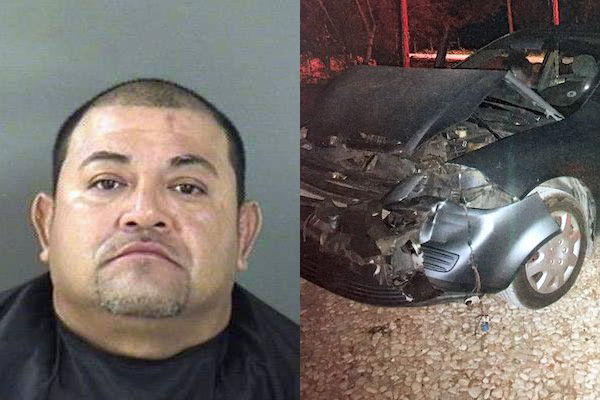 Man leaves accident scene in Fellsmere and arrested for DUI, leaving scene of accident, and driving on a suspended license.

A 37-year-old man was arrested on charges of DUI and leaving the scene of an accident, and driving on a suspended license after crashing his car into another motorist in Fellsmere.

Rodolfo Reyes rear-ended a vehicle that was traveling west on CR 512 waiting for the light to change at Willow Street. The investigation revealed that both drivers got out of their vehicles to inspect the damage.

When the victim driver asked Reyes to move his vehicle from the roadway, Reyes got back in his car, turned it around, and left the scene. The victim said he tried to catch Reyes but was not successful.

“Officers were able to follow a trail of vehicle fluid and debris to the Reyes residence at 9436 127th Court, where they found his vehicle, a 2006 Chevrolet Cobalt parked in the driveway. Officers subsequently found Reyes kneeling on the floor in his bedroom,” the Fellsmere Police Department stated.

Reyes complained of chest pains, so an ambulance was called. He was transported to the ER where he was treated and released. During his contact with Reyes, the officer detected several signs of alcohol impairment and asked Reyes to perform field sobriety tests outside. Reyes was unable to perform them successfully and was arrested.

Reyes was transported to the Indian River County Jail for processing but refused to provide a breath sample. A subpoena for blood records will be obtained. Reyes was ultimately arrested for driving under the influence, leaving the scene of a crash with property damage, and driving on a suspended license.