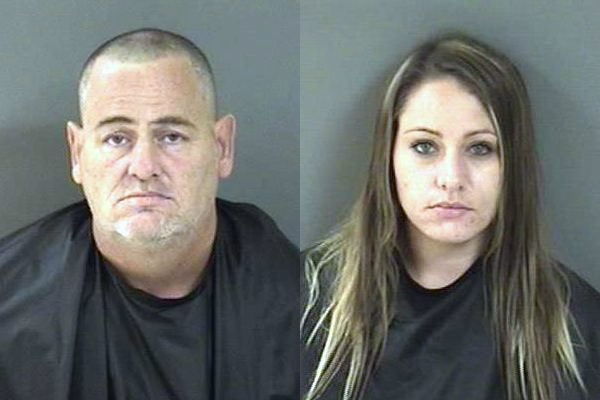 VERO BEACH – An officer was patrolling the area of 4425 20th Street in Vero Beach when he saw two people behind the Humane Society Thrift Shop stealing donated items left near the back door, according to the Indian River County Sheriff’s Office.

The incident happened Sunday at approximately 8:53 p.m. when the deputy observed a man and woman loading up a truck with children’s toys, a bookshelf, and other items.

The deputy made contact with 52-year-old Crosby Wayne Neavitt, and 26-year-old Natasha Marie Kennedy, who were both behind the building.

Neavitt said he was “Christmas shopping for his grandkids,” the report said. He said he didn’t have any money for presents so he took items from the dumpster.

The deputy told Neavitt that he watched them both rummage through the donated items left at the door, and that he never saw him at the dumpster.

“Neavitt had multiple items in his pockets such as kid’s toys like dinosaurs and plastic figurines,” the deputy said.

During a search, the deputy found several needles in a black backpack. Two of the needles had an unknown substance in them.

Kennedy said the needles belonged to her and they contained Methamphetamine. One of the needles were field tested positive for meth.

The items in the rear of the truck were two bookshelves, pocketbook, kids toys, toolbox, and numerous knick-knacks such as figurines. The estimated value at the thrift store is less than $300.00.

Neavitt was arrested and charged with Felony Burglary of Structure, and Petit Theft. Bond set at $3,000.00.

DUI suspect tells Sebastian Police he ‘loves them’ for arresting him

DUI suspect tells Sebastian Police he 'loves them' for arresting him