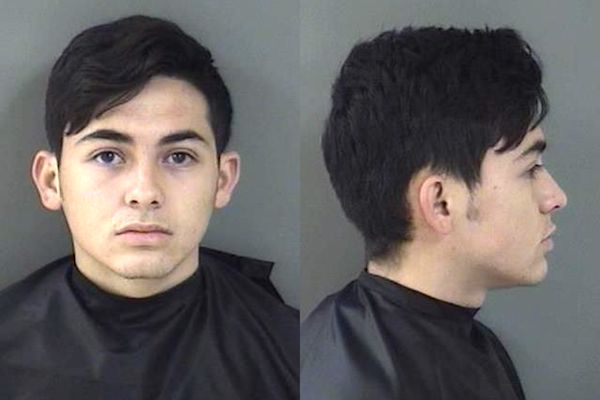 Francisco Magana Cendejas, 18, arrested in connection to hit and run accident that claimed the life of 19-year-old Desmond Francis Johnson.

VERO BEACH – On Saturday, the body of 19-year-old Desmond Francis Johnson was found behind the tree line on 58th Avenue in Vero Beach.

Police have arrested 18-year-old Francisco Magana Cendejas, a driver of a red Nissan Titan, in connection with the hit and run accident.

Witnesses say a red truck passed them on 58th Avenue at a high rate of speed. The truck continued northbound before turning around and returning to the crash scene. They saw the entire front left quarter panel torn away from the truck. They saw two men picking up the pieces of the red truck.

On Saturday, Magana Cendejas’s passenger saw the news article about the body of a 19-year-old found near 58th Avenue. He approached Magana Cendejas, but was told he hit a hog in the roadway.

After some discussion, Magana Cendejas promised to contact the Sheriff’s Office on Monday about the crash.

However, when Magana Cendejas failed to do so, the passenger who was with him that night went to the Sheriff’s Office and spoke with a deputy about the accident.

The passenger of the red truck gave the deputy the name of the driver and said there were others involved who helped clean up the roadway that night.

Later on Monday, Franciso Magana Cendejas was called in for an interview at the Sheriff’s Office.

Magana Cendejas told deputies “he knew he had hit a person who was walking in the roadway but did not see the person when he returned and searched the scene,” according to the report.

The driver did not call 911 to report the crash involving his vehicle and the pedestrian and ultimately fled the scene because he was scared, according to the arrest affidavit.

Magana Cendejas was placed under arrest for leaving the scene of a crash involving death and transported to the Indian River County Jail.

Desmond Johnson, 19, was found dead by his friend and coworkers. Deputies said they drove the route Johnson was known to skateboard on his way to work at McDonald’s twice.

Friends and coworkers first discovered Johnson’s shoes and skateboard on the side of the road on 58th Avenue. They found the body in a wooded area behind the road while walking Johnson’s route to work in an attempt to find him.