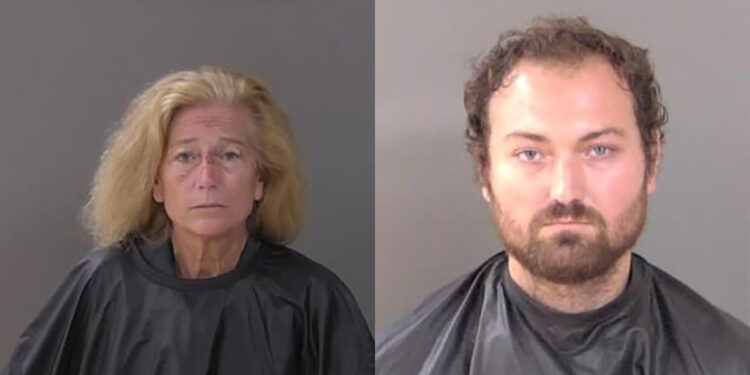 The Sebastian Police Department is reporting that two of their officers were taken to the hospital, treated, and released after being injured by a mother and her son.

The incident occurred Wednesday evening when the police responded to a disturbance in the 100 block of Main Street in Sebastian. As officers arrived, they spoke with Mona Lisa Wonder, 62, and Cory Wonder, 27.

While speaking with Mrs. Wonder, the mother, she attempted to walk away from the officers and refused to cooperate. While the police were attempting to detain her, Mr. Wonder, the son, attacked the officer.

“As the officer was trying to detain her, Mr. Wonder began violently attacking the arresting officer, subsequently taking both officers to the ground,” police said in a statement.

The police department said Mr. Wonder “viciously struck both officers about the face and head during the altercation.” The officers defeated Mr. Wonder’s attack, eventually taking him into custody.

At the same time, a third officer arrived on the scene and began to apprehend Mrs. Wonder, who was “still entangled in the skirmish,” according to police.

Mr. Wonder continued to be enraged and kicked the third officer in the chest in another attempt to defeat his mother’s detention. Both individuals were arrested and transported to the Indian River County Jail.

Mona Lisa Wonder was charged with resisting arrest and given a $500 bond.

Cory Wonder was charged with three (3) counts of Battery on a Law Enforcement Officer and issued a $30,000 bond.

“Fortunately, this unwarranted violence on our officers resulted in the apprehension of these two individuals who have no regard for the law. This incident was handled professionally by these heroes who were attacked for simply doing their job of protecting this City and the citizens we serve,” Sebastian Police Chief Daniel Acosta said.