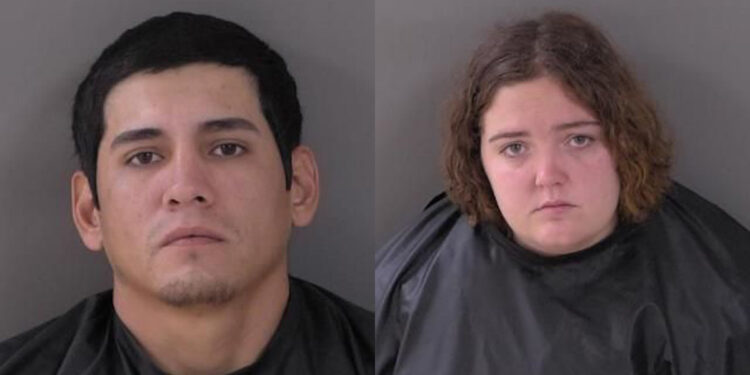 Two people were arrested and charged with Animal Cruelty and making fraudulent puppy sales. Most of the puppy sales occurred in Fellsmere, Florida.

The Indian River County Sheriff’s Office received numerous reports in reference to victims buying puppies that were either not as advertised, in poor health, sold before they were 8 weeks old, and with no Florida Certificate of Health.

Michael Angel Mendez, 26, and Shelby White, 25, both of Vero Beach, are accused of selling puppies to people for $400, $550, $600, $700, and even $2,500 each and promised to text or email the health certificate, shot records, and breed confirmation. But each time, the victims never received such information.

In addition, the victims later found that the puppies they purchased were not as advertised, with most being a mixed breed, not purebred.

At one point, the two tried to sell a purebred Chocolate Labrador puppy, but the buyer later observed a black dye substance on its paws rubbing off his hands. The buyer then demanded a refund, but Mendez and White refused. The buyer called the Indian River County Sheriff’s Office and conducted a traffic stop on the seller’s vehicle.

“Observed the dye-like substance on the puppy,” the deputy said. “Inside the cupholder of the truck was the cash from the sale.”

The couple denied knowledge that the puppy and paws were dyed black and said it must be dirt or dust. The two went on to tell deputies they were selling puppies to make extra money before Christmas. The sellers then agreed to offer a refund and took back the puppy, which prompted a further investigation by detectives.

Investigators observed text messages between Mendez and the buyer. The buyer asked for a refund, but Mendez responded, “Hey bud, no refund; I don’t give a fu** who you are… Just because you decided you didn’t like the pup, there’s no refund.”

The buyer responded to Mendez, telling him the dog wasn’t pure and painted.

In another incident, a person who bought a puppy informed Mendez that they noticed dark-colored dye washing off the animal during a bath.

Another buyer contacted law enforcement after they took their puppy to a veterinarian. The vet discovered the dog was vomiting and had flea infestation, hookworms, and other illnesses. Unfortunately, the puppy had to be humanely euthanized.

“It is in my professional opinion that the diseases (the puppy) had were a direct consequence of their living conditions and likely poor breeding practices,” the veterinarian, Diego R. Sobrino, said.

In another case, a Brevard County resident purchased a puppy and later learned there were discrepancies in the Florida Health Certificate. It was determined that the certificate was fraudulent.

Dr. Kathleen Walsh, at Live Oak Animal Clinic in Brevard County, stated the puppy had no appetite, had bloody diarrhea, and was vomiting.

“On exam, the puppy was weak, lethargic, and had profuse watery bloody diarrhea. A stool sample was obtained, and the puppy was diagnosed with Giardia, a tiny parasite that causes the disease.

On Dec. 1, 2022, deputies responded to a house leased by White, with Mendez at the residence. Deputies advised Mendez that they were there to check the welfare of the animals. Mendez gave the deputies permission to enter the home.

Once inside, the deputies observed two dogs inside a garage without access to the house. The dogs appeared to be French Bulldogs and were “panting with their tongues out, filthy with stained crusty hair, and appeared to have stitches,” the investigator said.

In addition, the garage where the two dogs were found was “filled with garbage and feces that was stacked 2-3 feet tall. There were two wire crates stacked upon each other that had old urine and feces inside and appeared to have not been cleaned out in some time. There was no water or food for the dogs, nor air conditioning inside the garage, with the temperature inside ranging in the mid 80’s,” the investigator said.

It was later determined there was no power to the residence. Flies and fleas both were swarming on and around us while inside, according to the affidavit.

Mendez told deputies the garage is where he keeps the dogs. Animal Control responded to the resident, took possession of the dogs, and treated them at the humane society.

The investigation led to a search warrant for the property, where they re-entered the residence and observed a room containing copious amounts of feces on the floor, both dried and fresh, as well as a small pile of wood shavings with urine and numerous piles of feces mixed.

“The rest of the house had bags of garbage and flies with an overbearing pungent smell. The entire time inside of the residence, myself and crime scene detectives were being bitten by fleas due to the severe infestation,” the investigator said.

Dr. Stapleton examined the two French Bulldogs rescued from the garage at the Indian River County Human Society and said, “both dogs had dried fecal material and a moderate amount of staining present on their body. Both dogs had skin sutures with hardened, dried debris present, presumably feces or dirt. The sutures have been present for at least 60 days, as the incisions are completely healed. Skin sutures should be removed 10-14 days after surgery, or they risk becoming a source of irritation and infection.”

In addition, Dr. Stapleton told investigators the ears on both dogs had thick debris inside, which caused irritation. There were fleas also observed in their fur.

“It is obvious and evident that Michael Mendez and Shelby White are conducting in a systematic, ongoing course of conduct with intent to defraud numerous people separately, and in doing so are obtaining funds/cash from each victim, by false pretenses,” the investigator said.

The two were charged with Animal Cruelty for the living conditions that were “beyond deplorable,” with no air circulation in the hot garage and no water nor food. Both dogs were not bathed in days or weeks and were covered in dried urine, feces, dirt, and fleas, all of which caused repeated infliction of suffering, according to the arrest warrant served.

Charges against Michael Mendez are as follows:

Mendez is currently being held at the Indian River County Jail on $185,000 bond.

Charges against Shelby White are as follows:

White is currently being held at the Indian River County Jail on a $91,000 bond.