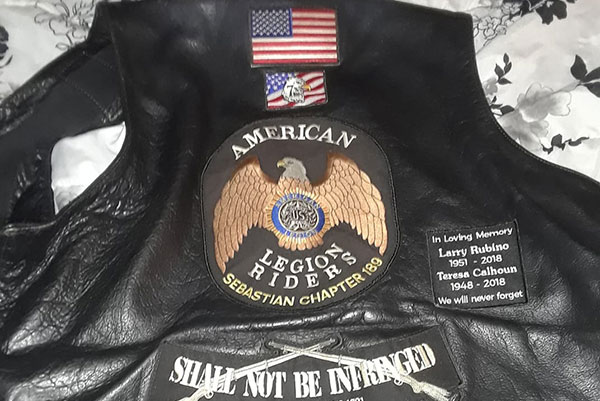 A man told Sebastian Daily that management from the Tiki Bar & Grill in Sebastian asked him to remove his vest because they violate their No Colors policy.

“So yesterday I was asked to take off my vest at the Tiki Bar in Sebastian. Apparently, they do not support Veterans or Values. Do not support this Business. God Bless America,” Jeff Gage told Sebastian Daily.

In August 2017, several Sebastian bars banned motorcycle colors and vests following an incident at Earl’s Hideaway Lounge with an individual and a biker gang. Since then, there’s been a controversy on whether Veterans can wear their vests, which most say does not break the rule.

Gage, who isn’t a Veteran but belongs to the American Legion, does not have gang-related patches on his vest. Gage wears a large “American Legion Riders Sebastian Chapter 189” patch, which is not a violent gang.

“You know us. The people who volunteer for nearly every event that goes on in the City of Sebastian. Show me one thing on this Vest that offends you or makes you feel uneasy. I’m really pissed. You haven’t heard the last of this story,” Gage said.

“We can’t ban one club from wearing a vest and allow another. Nobody is being discriminated against or refused service,” the management said in a statement.

The management also said they didn’t ask Gage to leave, but asked him to turn the vest inside out.

But Gage and several others say his vest has nothing to do with a biker gang.