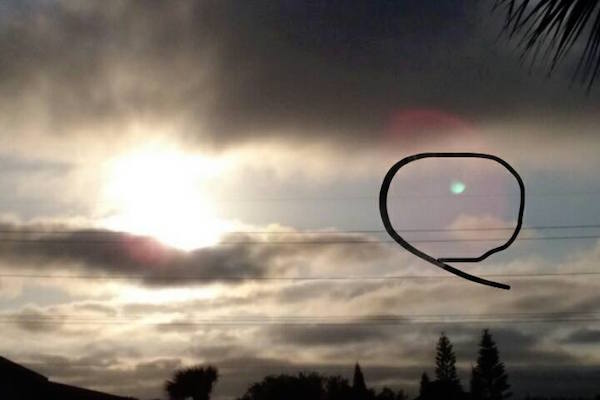 A green object was seen in the sky over Sebastian. (Photo: Duffie Almeida Fattey)

SEBASTIAN – A UFO was captured by a Sebastian resident when she was taking pictures of the clouds on Wednesday near the Indian River.

At first glance, the object appears to be a lens flare. But upon further investigation, the Unidentified Flying Object shows up in other images without the flare (see picture below).

“I was just taking pictures of the clouds and sun and noticed it,” Duffie Almeida Fattey said in a statement. “Then, 15 minutes later I went out and took more pictures.”

The object appears to be bright green, and the size is unknown. There are a lot of theories on what it might be. It can’t be the moon since it was on the opposite side of the planet at the time these photos were taken.

The object in the photo can’t be a meteor because they usually leave a tail and carry streaks, and meteors only last a few seconds. This UFO was in the sky for several minutes.

There have been other sightings in Sebastian reported to the Mutual UFO Network (MUFON), which is an American-based non-profit organization that investigates cases of alleged UFO sightings.

The first report of a UFO in the area was on January 4, 2015, when two red glowing objects suddenly changed direction, according to MUFON.

The second incident was reported on May 6, 2015, after several residents spotted a “metallic long inverted cross like shape” that made no noise.

MUFON received the third report of a UFO sighting in Sebastian on February 3, 2016, after witnesses saw a well-formed contrail that made a tight zig-zag flight pattern, into a loop. The UFO then appeared to go straight up with two black forms on each side.

There must be an explanation for this sighting. In the meantime, we’ll just accept it as a Christmas greeting.