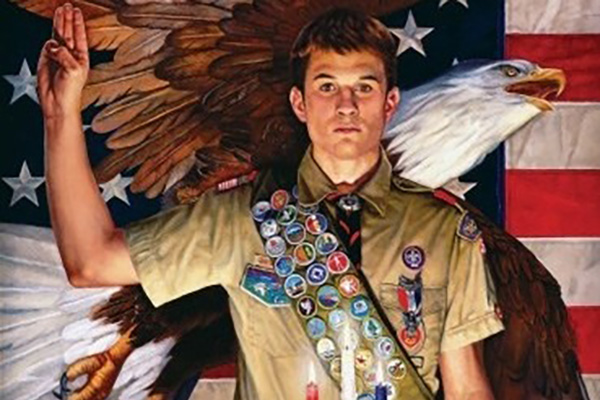 Sebastian BSA Troop 505 had seven boys earn their Eagle Scout ranking, the highest achievement a scout can receive. Since Boy Scouts, now Scouts BSA, beginning in 1911, only four percent of the boys have earned the Eagle Scout ranking after a lengthy review process.

Below are the bios of the 7 BSA Scouts from troop 505 who received their Eagle Scout ranking this year.

I began scouting at the age of 3, having two older brothers already in Cub Scouts! My Eagle Scout project was building a brick paver pad for a breast cancer awareness tractor named “Hope” for Ms. LaPorte of the Friends of LaPorte Farms in Sebastian. Ms. LaPorte has a dream, and I’m honored to have been apart of that dream. I love animals, and she runs an awesome farm!

My grandma and aunt are breast cancer survivors, so this project really hit home for me! Scouting means a lot to me because it helped to build my character and morale. It has prepared me for life!

I began scouting in first grade in 2011. My Eagle Scout project was to construct and install three pollinator nests.  A pollinator nest or hotel is a structure that accommodates native bees by providing cavities in natural materials for them to live. By providing habitat for pollinators to dwell, you can do a great deal to help out. Two were located at the Saint Sebastian Preserve and one at LaPorte Farms.

Being a Boy Scout allows you to pursue activities you wouldn’t normally do. It takes you places, not many have been and gives you a better appreciation of the world around us. The people you meet and places you go change who you are and make you a better person so that in the future, I can change the lives of others around me.

I was born into an active Scouting family! I officially became registered in first grade at age 6 as a Tiger. My brothers are both Eagle Scouts. My project was for the Sebastian Elks Lodge #2714. The Elks have supported Scouting in Sebastian for many years.

I knew there was a hazardous walkway leading to the flagpole, and I wanted to replace it for the safety of the membership and guests. I also wanted to bring beautification and respect to the are that displays the US, State, and MIA POW flags. Scouting is not just a uniform; it’s a way of life.

I began Scouting at the age of 4. My Eagle Scout Project consisted of building a pallet wall at St. William Hall in St. Sebastian Catholic Church. It also included building a podium, recycle and garbage center, and adding decorations around. This project started in June of 2019 and was finished in September of 2019. A line that has always stuck to me from scouting is “Be Prepared”. You may never know what can happen; the best thing to do is to be ready.

I began scouting in 2010. My project was the reconstruction of a playground at Abiding Presence International Ministries in Vero Beach. Boy Scouts has taught me how to become a better citizen and a person as a whole.

I began scouting in 2014. The name of my project was Buckets of Love. This project was for the First United Methodist Church in Vero Beach. I lead a team of boys to fill 160 buckets full of toiletries, food, water, and other health items. Then with the help of the church, we delivered the buckets to homeless veterans around Indian River County. Boy Scouts has helped me further my communication, skills, confidence, and outdoor skills.

These accomplished Eagle Scouts are now eligible to join the National Eagle Scout Association. The NESA’s objective is “to serve Eagle Scouts and, through them, the entire movement of Scouting.”

If you are interested in joining a BSA troop, go to the Scouting page and enter your zip code.