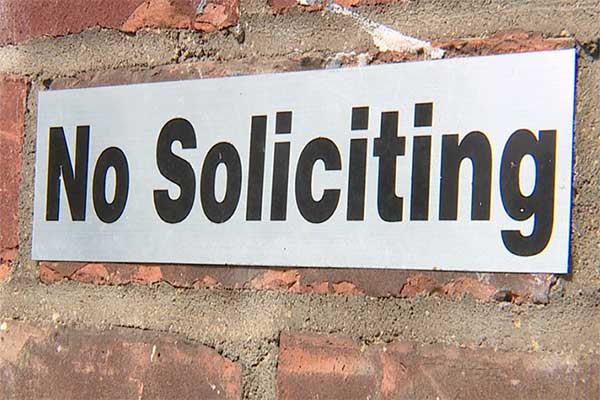 Sebastian councilwoman leaves her business card on a no soliciting sign.

A local resident said councilwoman Pamela Parris showed up at her front door after writing a letter to the editor to Sebastian Daily.

“It had become clear to me that Pamela Parris was looking for a fight,” Joanne Rein told Sebastian Daily.

Rein, a former United States Marine, said Parris showed up at her residence one day after the letter was published.

When Rein didn’t answer, Parris left her business card on a “NO SOLICITING” sign posted on her front door.

“As the person who found her business card right on top of the No Soliciting sign at my front door, I thought of my need to have police protection because I wrote my opinion,” Rein said.

Rein believes that this is an act of intimidation for voicing her opinion about the councilwoman who has faced public scrutiny for lying about a controversial rant she posted on Facebook.

“I request that Pamela Parris not approach me again. If I find that I need to get a protective order against her, I will do so. It’s not okay for a politician to show up at my door the day after my opinion of her is published in a local newspaper,” said Rein.

Rein says she has the right to free speech, and finds it very disturbing and un-American that a public official went to her home in this way after the letter was published.

If Parris has anything to say to her, Rein suggests she do it at a City Council meeting or through legal remedies.

Rein is asking Parris to leave her alone.

So far, one other person said they allegedly had a run-in with this kind of intimidation from both Pamela Parris and Damien Gilliams.

This incident comes in the midst of Mayor Ed Dodd claiming the two council members broke the Sunshine Law.

Man proposes to girlfriend on one of the islands in Sebastian