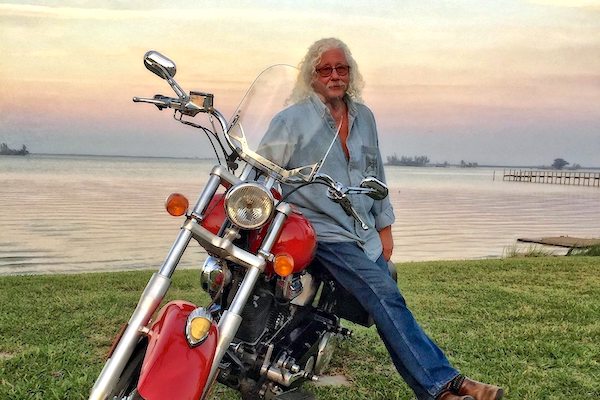 Arlo Guthrie back on tour.

SEBASTIAN – Folksinger and songwriter legend Arlo Guthrie took a few weeks to relax at his home in Sebastian before leaving again to resume his international tour.

“It’s been good to have some days off, especially where the weather has been good. Got some sun, water, and all around R&R,” Guthrie said.

Australia is one of the stops he’ll make while on tour, although he knows not to tell anyone about his folksinger status.

“I remember once, back in the mid 60’s while in the UK trying to rent a car when they asked my profession I wrote ‘folksinger.’ They told me I couldn’t rent a car. So the next day I went back to the same place wearing my big cowboy hat and told them I owned cattle ranches. I got a car immediately. But, I still had to drive on the other side of the road and clipped the tail light of a parked car on the way out of the lot. I had an English girlfriend (Caroly) at the time, and she did the rest of the driving from then on,” Guthrie explained.

When June rolls around, Guthrie and his sister Nora will participate in the annual Coney Island Mermaid Parade. Someone is creating an outfit for him, but he says it will not be very freaky.

“I’ll leave that up to the other participants,” he said. “We’ll also use the occasion to unveil a plaque that designates part of Mermaid Avenue, as Woody Guthrie Way (or something like that), as an acknowledgment of my father’s home in Brooklyn. The same house we all grew up in when we were quite young. It’s long gone now having been torn down decades ago.”

Guthrie loves the river when he’s in Sebastian. Early mornings, he grabs a cup of coffee in one hand and a camera in the other to watch the sun come up. Guthrie calls it “habitual behavior.”

The current tour is called “Back By Popular Demand” and there’s a little more than a half year left. Guthrie is very busy these days.