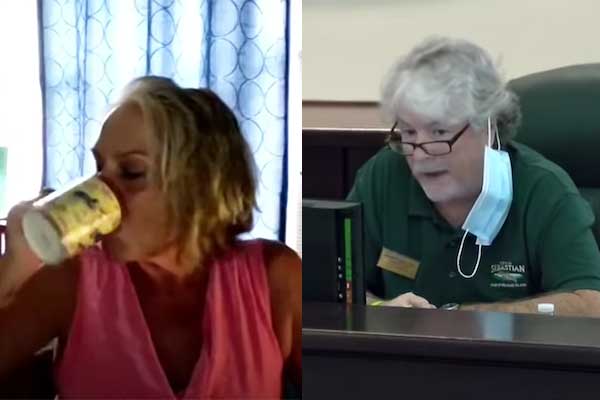 Sebastian citizens who attended Wednesday night’s meeting say council members Damien Gilliams and Pamela Parris showed more incompetence as they did not do their homework for the annexation. Parris attended the meeting from home via Zoom.

The meeting had one simple agenda item: to schedule another executive session for the council to meet with attorneys and decide on the annexation.

Anon apologized for not being at the city council meeting as he is currently on military duty and available via Zoom to participate.

However, Gilliams is accused of spinning his apology by creating more confusion during a simple task to schedule another executive session to discuss the annexation.

“I see that the city attorney is apologizing in advance, and I think I know what it’s about, and to me, it looks like a do-over. It’s not simple actually, it’s a very complicated matter, and I think it was very neglectful on his part that it did not get covered at that last executive session. It’s very serious. Very serious, because I’m about full transparency,” Gilliams said before Mayor Ed Dodd interrupted him.

Gilliams then questioned why the annexation agreement wasn’t put in his packet at the executive session since they are making “very important” decisions.

“What I expected you to do is follow the law, and the law says we cannot discuss this outside the executive session,” Mayor Dodd said.

Even so, Gilliams told Dodd he’s not discussing it, but he wants to make “educated decisions” on “behalf of this community” and needs the annexation agreement in front of him.

However, the annexation agreement has been posted and made public on the City of Sebastian’s website since October 2019 in full transparency.

“I need to be full transparent with this community because of what’s going to happen is very serious, what’s going to transpire, at that executive session, I see it coming, I see the writing on the wall,” Gilliams said.

Councilman Jim Hill interrupted Gilliams and said he already had the annexation agreement like the rest of the council members. Mayor Dodd said all council members also received a copy of the agreement last November.

Gilliams wanted one part of the annexation agreement read into the record, even though there’s pending litigation. The council decided whether it would be allowed since they are forbidden to discuss any of it with the public. The agreement is public record, and anyone can get a copy of it, but Gilliams insisted they read it. The council then voted 3-2 in favor of the reading part of the agreement.

Vice-Mayor Charles Mauti, Damien Gilliams, and Pamela Parris voted to go forward and read the part of the agreement at the meeting. Jim Hill and Mayor Ed Dodd did not.

Hill told Parris she has the annexation agreement and encouraged her to read it herself.

“Well, I asked Mr. Carlisle for it earlier today … I’d like to see it again too,” Parris said.

Mayor Dodd told Parris she would have a copy of it had she attended tonight’s meeting, but she received the agreement last November.

“In November? Hmm hmm. I was sworn in last November, pardon me Mayor Dodd, but I was brand new to this. Still pretty new myself. So I’d like to see it,” Parris told Dodd.

“If you’ve been here this evening, you’d have a copy of it in front of you right now,” Mayor Dodd said.

Citizens attending the meeting didn’t understand why Damien Gilliams and Pamela Parris didn’t do their homework on the annexation or bother to read the agreement that was given to them last November, calling it their job to do so.

Twenty minutes into the meeting, as Gilliams continued to discuss the annexation, Mayor Dodd called for a ten-minute recess.

Following the recess, the public provided input. Gilliams said he will respect the public input as long as he “still had the floor.”

“I don’t understand why it would take so long to just schedule an [executive] meeting to discuss this. I’m a little unclear as to why it is one council member’s job to educate two others who were, in their words, ‘duly elected.’ It would seem to me that they should have done their homework, and had they done their homework; maybe they need to set the other council member straight in that they can read and understand what’s going on,” former Sebastian Police Chief Michelle Morris told the council.

Sebastian resident Christopher Nunn said he was surprised because Gilliams and Parris ran on the annexation platform to get elected, but now they seem so confused and obviously never read the annexation agreement.

“I’ve read the annexation agreement, and I’m not on the city council. I don’t have a platform on why I am running. The meeting is to be scheduled. Enough of the childish games, let’s get moving forward with what we need to do,” Nunn told the council.

There is also growing support for the Graves Brothers since owner Jeff Bass attended the previous meeting and answered questions that many people had.

“I’ll address this to the Graves Brothers. We want them here. We hope they stick with us, our problems will be resolved very shortly, and I hope that this all goes through,” Timothy Cole said.

Many citizens sat in the meeting with disgust every time Gilliams took the floor to discuss the annexation or to use the city’s time and money in what appeared to be grandstanding for himself and Parris.

“This is why we believe they are self-serving individuals. They can’t complete one agenda item because Damien is grandstanding,” a resident said after last night’s meeting.

Parris then addressed the city council.

“I believe it was Councilman Gilliams’ intention to inform the public, not ourselves. And forgive me for not ummm remembering the day I was elected, umm, and the day I received these papers uhhh six months ago. But this is a small snag, and I’m looking forward to the executive session, absolutely,” Parris said.

Charles Mauti then addressed the council.

“I just want to remind everybody that I sat on the Planning and Zoning commission. I’ve followed this annexation from the beginning, and I’ve read all of this. So, I’m well educated about what’s going on. So, please understand that we do not need Mr. Gilliams to educate us, we know what’s going on, and that’s what we’re going to vote on, the facts,” Mauti said.

Damien Gilliams then wanted City Attorney Manny Anon to discuss a part of the annexation agreement in detail because he felt the public should know more about it. If not, Gilliams said he “would be happy to do it for him.”

However, Anon wasn’t comfortable since it could breach the executive session’s confidence to discuss litigation.

“I don’t feel comfortable at this point of having any conversation about the annexation agreement. This should have been a simple issue. I’m not sure why it’s getting too complicated. We’re going to have all of this discussion and down the road it’s all going to be public. My role is to advise council not to discuss it with citizens of Sebastian,” Anon said.

Gilliams then wanted to discuss details about the litigation, such as liability to the City of Sebastian if they don’t pursue the appeal.

“Your stepping into the executive session,” Mayor Dodd told Gilliams.

Then Gilliams said he is going to require additional monies secured in escrow for the litigation.

“Councilmember Gilliams, you can’t require anything. You’re a single member of this council, so would you quit talking like you’re the King of Sebastian,” Mayor Dodd asked Gilliams.

Dodd continued to ask Gilliams to stop discussing a part of the litigation that’s only for the executive session.

Gilliams then called Dodd a “tyrant” and that he’s had enough.

Several residents in the room began to yell at Gilliams, asking him, “What is it that you don’t understand? You can’t talk about it Damien!”

Forty minutes into the meeting, the city council voted 3-2 to have the executive session on July 22nd at 5:00 p.m., before the council’s regular meeting.

Vice-Mayor Mauti and Councilman Gilliams were the only two who voted not to have the executive session on that day.

Several citizens have been in contact with the Florida governor’s office asking Ron DeSantis to remove Gilliams and Parris.

Two weeks ago, the City Council voted to request the governor to suspend and remove the two council members following their arrest.

Gilliams and Parris were arrested and charged criminally for breaking Sunshine Laws and perjury after lying to the State Attorney’s Office.

During the past month, Gilliams has been accused of voter intimidation by harassing the recall group during at least three petition signings at Riverview Park.

The City of Sebastian is also facing a major lawsuit by a government advocate after Damien Gilliams, Pamela Parris, and Charles Mauti broke Sunshine Laws by having a secret meeting to fire city staff. According to the State Attorney’s Office, the meeting, where Gilliams wanted to become the new mayor, was deemed “illegal.” There are now additional Sunshine Law complaints against the trio.