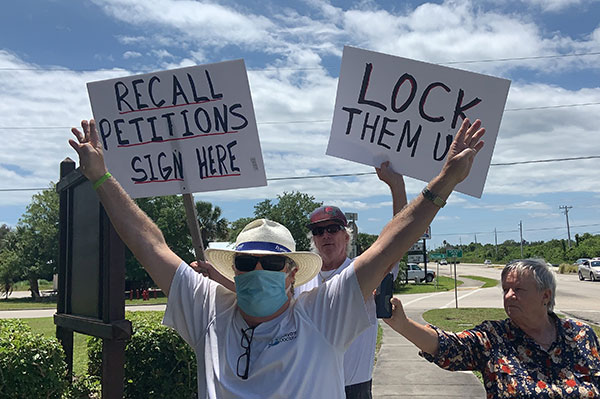 The Sebastian Voters Against Gilliams and Parris, a PAC to recall three council members, are expected to bring completed petitions to the City Council meeting tonight.

The group plans to make an announce at the meeting and say how many signed petitions they have for Council members Damien Gilliams, Pamela Parris, and vice-mayor Charles Mauti.

According to Tracey Cole, the group’s founder, she and others will bring the petitions in containers during the announcement.

The recall group rented Riverview Park from Wednesday through Sunday last week, where thousands of people showed up to sign petitions.

On May 22, 2020, the State Attorney’s Office officially charged Charles Mauti with Public Order Crimes. Also, there could be more charges coming for Damien Gilliams and Pamela Parris for their part in the illegal meeting where they tried to terminate city staff and appoint Gilliams as the new mayor.

The State Attorney’s Office is still speaking with others involved, especially those who were present inside and outside the city chambers during the meeting.

Gilliams, Parris, and Mauti are facing a big lawsuit by a Florida attorney who defends the Sunshine Law. The suit could cost taxpayers in the City of Sebastian.

Lawyers in Florida speculate that Gililams, Parris, and Mauti violated the most Sunshine Laws in the state’s history.

The Sebastian City Council meeting is tonight at 6:00 p.m., and can be viewed online using ZOOM if you can’t make it in person.

Rain in Sebastian for most of the week