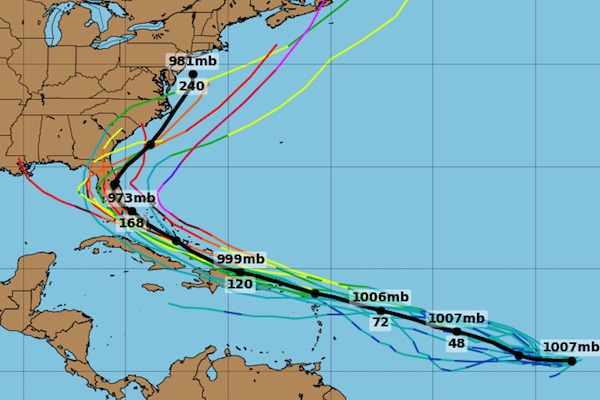 There are two tropical waves in the Atlantic, although one is moving west-northwestward at 15 to 20 mph.

While one of the disturbances is showing a tracking towards Florida, anything can happen from now until then.

The first tropical wave is expected to move over the Caribbean Sea and produce disorganized thunderstorms and gusty winds. This system is forecast to move slowly westward.

The second tropical wave, called Invest 98L, is showing concern, although not a threat to Florida at this time. The disturbance is 900 miles west-southwest of the Cabo Verde Islands and is producing showers and thunderstorms.

“Environmental conditions are conducive for further development, and a tropical depression is likely to form within the next couple of days while the system moves westward to west-northwestward at 15 to 20 mph across the central and western portions of the tropical Atlantic,” the National Hurricane Center (NHC) said in a statement.

There’s a 90 percent chance of formation during the next five days.

All computer models for Invest 98L are showing a track towards Florida. However, anything can happen from now until then. For example, wind shear could steer the storm away from our coastline.

Also, spaghetti models this far out have never been accurate in past forecasts. We probably won’t know anything for at least five days on whether or not it’s a threat to Sebastian, Florida.

Sebastian Daily will continue to monitor the tropics and report any new information released by the NHC.