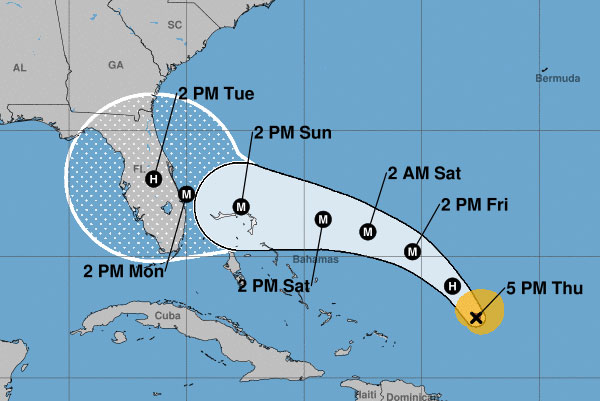 Hurricane Dorian is now expected to make landfall in Florida on Monday night and into Tuesday morning, according to the National Hurricane Center.

Dorian is currently slowing down in movement, but wind speed is still increasing. The hurricane is still expected to become a Category 4 storm with 130 mph winds when it makes landfall.

Sebastian has been in the spotlight on several computer-generated models as a possible area of concern, but now that might be changing. As we’ve said since Wednesday, the tracking will change with Hurricane Dorian in Florida.

“The new NHC track forecast is essentially unchanged through the first 2 to 3 days, but has been adjusted southward and somewhat slower than the previous advisory at 96 and 120 hours,” the National Hurricane Center said.

There has also been a change in most of the computer-generated models. Some are now moving towards the open Atlantic near Florida.

However, the GFS/USA model shows landfall near Sebastian. These are unofficial forecasts, but the EURO and UK models have always been a little more accurate than others. Again, this isn’t the official forecast, but it may be something for us to keep an eye on.

Hurricane Dorian can make landfall anywhere between South Georgia and The Keys. It’s still too early to predict where this hurricane will make landfall.

The schools will be open on Friday but closed Monday in Indian River County and Brevard County.

Dorian is located 330 miles from the Southeastern Bahamas with maximum sustained winds of 85 mph. The hurricane is moving at 13 mph.

In the coming days, we will have a much clearer picture of where Dorian will make landfall. Until then, remember that South Georgia and The Keys are a long stretch.

Sebastian residents should have their hurricane plan in place. There’s no need to panic right now, as we’ve said before, Hurricane Dorian’s path is expected to change again.